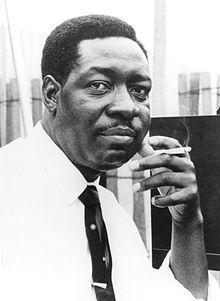 Otis Spann was an integral part of the legendary Muddy Waters band in the 1950s and ’60s. He took his time to launch a solo career. His discography is still a great one, and it’s clear why many Chicago blues fans consider him Chicago’s best post-war pianist. Spann was a part of Waters’ Chess waxings from 1953 to 1969. His rippling 88s provided the drive for Waters’ 1960 live version “Got My Mojo working” (cut at Newport Jazz Festival where Spann dazzled the crowd with some sensational storming boogies). Friday Ford, a local ivories legend, inspired the Mississippi native to start playing piano at age eight. He was 14 years old and playing in local bands. After Friday Ford died, Spann emigrated to Chicago in 1946/47. Big Maceo took Spann under his wing. Spann performed solo and with Morris Pejoe, before he joined Waters in 1952. The Chicago icon’s first Chess date was “Blow Wind Blow,” which he produced the following year. Spann’s ivories were featured in several Waters classics, including “Hoochie Coochie Man”, “I’m Ready” and “Just Make Love To Me.” Chess failed to recognize Spann’s vocal talents, which is strange. His Chess output was restricted to “It Must have Been the Devil”, a 1954 single that featured B.B. King was the guitarist, with sessions recorded in 1956 and 1963 that have remained in the archives for decades. Spann turned to other avenues, recording a beautiful album for Candid in 1960 with Robert Jr. Lockwood, a solo Storyville record in 1963, a set for British Decca in 1964 that saw him with Eric Clapton and Waters, and a Prestige LP in 1964 where Spann sang with James Cotton. Spann was recorded by Vanguard and Testament in 1965 as a leader. The Blues Is Where It’s At was Spann’s 1966 classic album for ABC-Bluesway. Although it sounded live, the recording was actually a studio session that was enlivened with enthusiastic onlookers who applauded each song. Waters, Sammy Lawhorn and George “Harmonica” Smith were part of the support band. The Bottom of the Blues was Otis’ 1967 Bluesway encore. Lucille Spann, Otis’ wife, sang the lead vocals. Spann was most famous for his work with Muddy Waters on the Chess set Fathers and Sons. However, the pianist was ready to start a solo career. He recorded a set for Blue Horizon featuring Fleetwood Mac, British blues-rockers. This set produced Spann’s laid-back song “Hungry Country Girl.” In 1969, he handed over the piano to Pinetop Perkins. But fate wouldn’t allow Spann to reach solo stardom. He died from cancer in April 1970.