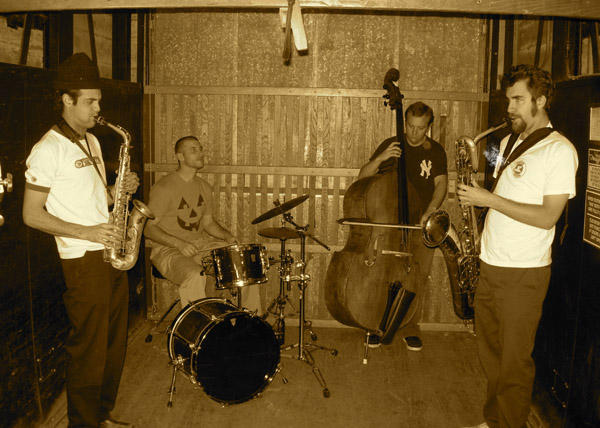 Outhead was a Bay Area band that played the best clubs and rocked storefronts. Outhead is now based in Brooklyn with Alex Weiss, the band catalyst and Send This Sound To the King producer. Basic tracking was done in Oakland by the quartet, with Weiss handling overdubs in New York. Weiss was a protégé of John Tchicai, the free-jazz pioneer. He was also a member of the ensemble at San Francisco’s St. John Coltrane Church. Outhead was shaped by what he learned from Tchicai. Weiss states that John Tchicai was a very skilled musician who also had a great appreciation for music and a willingness to play with other musicians. He also wanted to push the boundaries in terms of sound. He believed that experimentation was vital to artist growth. These are the values Outhead stands for.
Another influence was the loud and raw energy of punk music, which had a profound impact on Weiss’ ideas about what a band should sound like. He said that his first free-jazz album, New York Eye & Ear Control with Tchicai and Don Cherry, Roswell Rudd (Gary Peacock, Sunny Murray), made “perfect sense to me”. “Free-jazz was a sonic combination that shared a primordial sonic energy with punk rock. In that both were about standing up for what you believe is right, aesthetically, socially and politically, I felt a connection between punk rock and free-jazz, Both styles took a strong stand against the majority view. I realized that I could transfer the energy of punk to the saxophone, and the ideas about the unusual to a jazz group.

The captivating combination of Charlie Gurke and Weiss’ saxophones sounds second-nature. This is because the two musicians have been playing together in many ensembles over the years. These include a big band, a quartet, and even salsa bands. Weiss states that they tag-team well together with their lines and improvisation. “Without a keyboard or guitar, we are free from any harmonic constraints and can be really creative melodically and harmonically. My impression is that our compositions complement one another. Charlie’s is more grounded in jazz tradition, while mine is more unconventional. This hard-grooving and heavy-hitting rhythm section is a blessing. Rob and Dillon make a great pair, as Rob is a Wagner lover and Dillon is a construction worker-poet who plays the drums. They are like “bedrock” together.

Dillon Westbrook, Outhead’s drummer, is the one who sums it all. Dewey Redman, Ornette Coleman’s second great band, was a wonderful place to meet. This allowed the group to create its own identity, which brought out the best in each member.