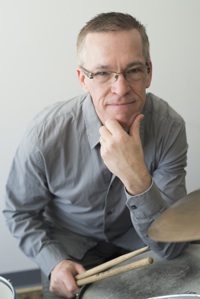 Brooklyn based Jazz Drummer/Composer, and recent Juno nominee, Owen Howard has been on the cutting edge of the New York jazz scene for the past twenty years. Born and raised in Edmonton, Canada his passion for the drums began at the age of 15. As a young up and coming drummer in Edmonton, Owen had ample opportunities perform and hone his skills as a sideman with many fine Canadian and International artists passing through town. In 1988 he made the move to New York, to complete his BFA at the New School for Jazz and Contemporary Music. “These performances are thoughtfully conceived and rendered with maturity”, has been written of Owen’s role as a bandleader and a composer. Owen currently has five cds to his credit, Sojourn, Pentagon (both on Koch), Days Before and After (co-lead with Andrew Rathbun) and Time Cycles (both on Fresh Sound). His most recent CD “Drum Lore” (BJUR Records) received a 2011 JUNO award nomination for Jazz Album of the Year and has garnered much high praise from fans and critics around the globe! With his personal approach to the drums, Owen is much in demand as a sideman as well. He has shared stage and studio with greats such as Joe Lovano, Kenny Wheeler, John Abercrombie, Dave Liebman, Kenny Werner, George Garzone, Dave Holland, Sheila Jordan and Tom Harrell, to name only a few. Being a vital part of a community of creative improvisers, Owen continues to collaborate with contemporaries such as John Oâ€™Gallagher, Andrew Rathbun, Frank Carlberg, Adam Kolker, Benedikt Jahnel, John Hebert, Ben Monder, Chris Potter, Andy Middleton, and many, many others. Owen has over 40 appearances on recordings as a sideman and continues to tour the world over, both as a leader and a freelance artist in a wide range of musical contexts. As an educator, Owen has conducted workshops and clinics throughout Europe, Canada and the U.S. He has been on faculty at The Banff Centre Of The Arts, The Maine Jazz Camp and has held guest professorships at St. Francis Xavier University (Nova Scotia) and The University of Fine Arts, in Berlin. from http://owenhoward.net