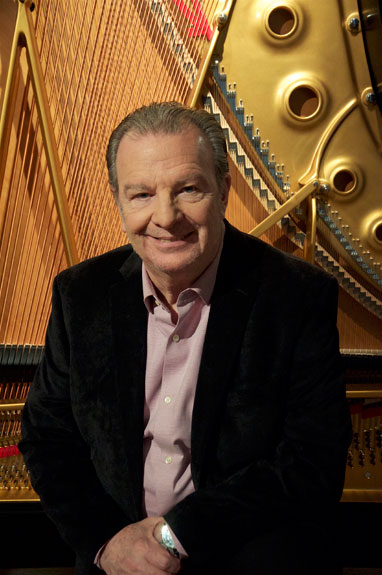 PABLO ZIEGLER was a born in Buenos Aires on September 2, 1944. He graduated from the Buenos Aires Music Conservatory as a Piano Professor. He continued his studies alongside Adrian Moreno, Galia Schaljman. Professors Gerardo Gandini, Francisco Kropflt taught him composition. He began playing in different jazz groups at age 14 and continued to perform solo piano concerts until he turned 18. He then created PABLO ZIEGLER TERCETO, which was dedicated to playing classical music with his own arrangements. At the same time, he also wrote music like: POLVO DE ESTRELLAS Musical, LA NOCHE DE LOS GRANDDES TV; ADIOS ROBERTO and TACOS ALTOS Film music. He joined Master ASTOR PIAZZOLLA’s quintet in 1978 and began his tournees throughout Europe, U.S.A.A., Japan, etc. He played with internationally-respected artists like the American Gary Burton and Milva, an italian singer. Master Astor Piazzolla, who had a heart attack in 1989, decided to end his Quintet. ZIEGLER began to rehearse since then with his “CUARTETO PARA EL NUEVO TANGO”. His debut was May 31, 1990. It was a huge success with both the public and the press. He recorded “LA CONEXION PORTENA” his first production as a composer of New Tango at the Sony Music label. He is then invited to record Piazzolla’s works with the Buenos Aires PHILHARMONIC ORCHESTRA under Pedro Ignacio Calderon. They performed at Colon theatre in Argentina and EXPO-SEVILLA92 in Spain. He is invited by Ettore Strata, an American conductor, to perform as a soloist on “Symphonic Tano”, which was released by Warner Teldec in the U.S.A. where he also recorded a composition: “MILONGA EN EL VIENTO”, with The Royal Philharmonic Orchestra. He is invited to Santa Fe Chamber Music Festival in 1992 to perform in New Mexico (U.S.A.). The Mayor of New Orleans awarded him the title: NEW ORLEANS CITIZEN. He arrived in Bs.As. He arrived in Bs.As. He was also invited by La Paz Mayor Office to play at the Central Bank Theatre that year. (Bolivia). Later, he returns to the U.S.A. with his quartet, playing at Santa Fe Chamber Music Festival twice, and then at Salt Lake City’s Open Area Festival in Utah. He also recorded at Minneapolis Walker Art Center (Minnesota), and recorded at Saint Paul Radio. This audition lasted one hour, which was broadcast by 200 American radio stations. He called the program “Saint Paul, Sunday morning” at the end 1993. In Europe, he performed in Frankfurt, Kalsrhue, Athens in Greece, and The Instituto A’lla Illa in Rome. He performs with this group at several Summer Festivals in the U.S.A., including “Botanic Gardens Summer Series” (Denver), “Ravinia Festival” (Chicago), “Miller Amphitheatre Outdoor” (Houston), etc. He is invited to join the “Astor Piazzolla Auditorium”‘s inauguration where he performs with Eladia Blazquez, Jairo and others. He then travels to Mexico where he performs at “El Claustro De Sor Juana”. He is then invited by The Argentine Embassy (Canada) to perform and is later invited to the Leight University of Beetlehem, Pennsylvania (Pennsylvania), to perform. He performs in Argentina several times in 1995. He is invited by Julio Boca to perform at “10 YEARS FESTIVAL” for two weeks at “LUNA PARK”. He writes a theme for the Quintet and Symphonic Orchestra. Jose Angel Trelles, an ex Piazzolla singer, was invited to perform with him and the quintet a show called “Por Amor a Buenos Aires”. In 1996, SONY CLASSICAL invites him to arrange and record an album of Piazzolla’s tangos. He then travels to Medellin where he performs with his Quintet at El Teatro Metropolitano. Also, he is invited by The Philharmonic Society of Bogota (Colombia) in a Music Festival called Musica y Musicos de Latinoamerica. After that, he plays in a Piazzolla Tribute at Teatro Coliseo (Buenos Aires). His show, “Por amor a Buenos Aires”, he presents in the Sala Villalobos del Teatro Nacional with Jose Angel Trelles in Brasilia (Brazil). He records an album with Gary Burton and Piazzolla’s songs at the end of the year, and performs live at “Biblioteca National” in Bs. As. He travels to New York in 1997 for the release of “Los Tangueros”, his album with Emanuel Ax, at “The Knitting Factory”. He begins a tour of the U.S.A. leading his Quintet For New Tango at the following Festivals and Theatres: Smithsonian Institute; Ravinia Festival, Santa Fe Music Hall; Dallas Museum of Art. He also performed with Emanuel Ax in concert in Japan. He also did a TV shoot for NHK Japan TV. He signs a contract to BMG/RCA VICTOR at the end of the year and is made an artist for this record label. The American Composers Orchestra invites Mr. Ziegler to take part in a one week symposium entitled “MEETING BEHIND AMERICAN COMPOSERS and LATINAMERICAN COOSERS”. He performs at The Hispanic Theatre (N.Y.) and at The Weill Recital Hall (N.Y.). Two concerts for two pianos are held, where Mr. Christopher O’Riley is introduced as his piano partner. The piano duet performs in GUILMORE INTERNATIONAL KENYBOARD FESTIVALS in Kalamazoo (Pennsylvania); three concerts at THE JAZZ BAKERY Los Angeles (California); and at SPRINGTWILIGHT CONCERT Meadowood Napa Valley, (California). STEINWAY