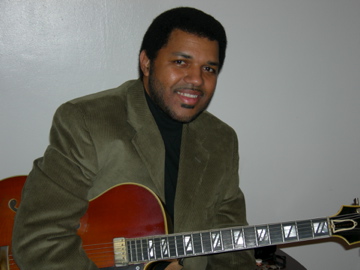 Pascal Bokar, guitarist/composer, is the embodiment of the deep cultural link between American Jazz and Africa’s musical and spiritual roots. Born in Paris, raised on the coast of Mali, Segou and Dakar in Senegal and a long-time resident of San Francisco. Dr. Bokar is a composer, guitarist, vocalist and educator who has developed a wide range of skills that reflect his unique experience. Pascal met Barney Wilen in France while studying in 1981. He was a renowned French saxophonist and he performed in European festivals for two years. Pascal moved to the United States in 1983 and was blessed with the opportunity to perform alongside a wide range of exceptional musicians including Roy Haynes, Donald Byrd, Dizzy Gillespie and Donald ‘Duck’ Bailey. Pascal’s conversations with Diz about the reintroduction of African rhythms and textures in American jazz and popular music greatly influenced his musical pursuits. For almost a decade, Dr. Bokar was a professor of Jazz and World Music in the University of San Francisco. He began his formal studies in 1980 at the National Conservatory of Region, Nice, France. He moved to Boston in 1983 to study at Berklee College of Music. After many years performing, he decided to return to school and earned a Master’s degree from Cambridge College in 1998. He received his doctorate in education from the University of San Francisco in 2006. He joined the faculty shortly after. Dr. Bokar currently leads two ensembles, the AfroJazz Sextet, which includes a guitar, Kora, upright bass, drums, and West African rhythms, and the World Band, which includes a banjo, banjo, and two West African drummers. Both ensembles have traditional African dancers available for performances. He is the author of From Timbuktu and the Mississippi Delta: West African Standards of Aesthetics Have Shaped the Music of the Delta Blues. from http://pascalbokarthiam.com