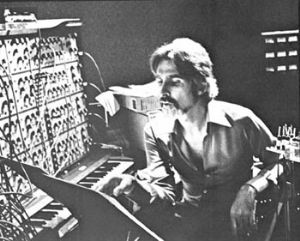 Patrick Gleeson (born ca. Gleeson was born in 1930 and is an American musician, synthesizer innovator, composer, and producer. Gleeson started to experiment with electronic music at the San Francisco Tape Music Center in the mid-’60s using a Buchla synthesizer and other devices. After hearing Walter Carlos’ Switched On Bach, Gleeson bought a Moog synthesizer in 1968 and established Different Fur Recording Studio. In the 1970s, he worked alongside Herbie Hancock and toured with Hancock. He also appeared on the albums Crossings and Sextant. Hancock credits Gleeson for introducing him to synthesizers, and with teaching him technique. Both Sextant, Headhunters were recorded at Different Fur studios. Gleeson has collaborated with many Jazz musicians including Lenny White and Freddie Hubbard. Gleeson has recorded several solo albums. He started with Beyond the Sun: An Electronic Portrait Of Holst’s “The Planets” album in 1976. Walter Carlos provided the sleeve notes. In 1976, the album was nominated to win a Grammy for “best-engineered recording-classical”. Beyond the Sun was then followed by Patrick Gleeson’s Star Wars in 1977. As an engineer, he worked on the 1978 Devo album “Q: Are We Not Men?” A: We are Devo! Part of it was recorded at Different Fur. In 1985, he sold his interest in Different Fur. Gleeson was involved in the score of many film soundtracks including The Plague Dogs and Apocalypse Now. He has been a part of nine television series, including Knot’s Landing. From Wikipedia