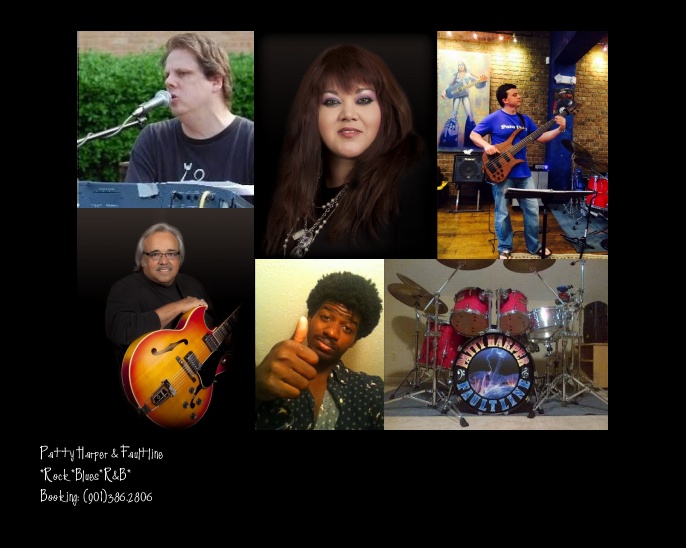 Patty Harper & Faultline is a five piece, Memphis based, House Rockin’ Band. Our “Blues You Can Feel CD” is comprised of 9 originals and 2 cover tunes, all in the blues genre. When we perform live we can either play a whole night of blues or we can mix it up and perform an eclectic repertoire consisting of lots of great classic rock & old-school dance floor packing R&B classics mixed with a variety of crowd pleasing blues favorites. Vocalist, Patty Harper has been raising the roof belting out the blues & rock since hooking up with guitarist Steve Harper in California in 1992. Prior to that time, she had sung various styles of music including Top 40 pop, jazz and rock opera throughout the U.S. & Europe, with performances in England, France, Germany, Switzerland & Holland at such prestigious venues as The Montreaux Jazz Festival. Her musical journey with Steve Harper began about 23 years ago in Southern California, where they worked steadily at various rock & blues venues, sharing the stage with the likes of Coco Montoya, Walter Trout & Billy Preston & headlining annual events & Fundraisers for The American Cancer Society, The Humane Society, The Riverside Philharmonic & various annual concert series for Cal State University SBDO & The City of SBDO. They subsequently relocated to Las Vegas, Nevada where they took the stage at area clubs, biker bars & casinos including The Images Cabaret at The Stratosphere Towers, The MGM Grand Adventures Theme Park, The Blue Note Jazz Club, The Traveling Vietnam Wall & at “Red, Hot & Blues” – a fundraiser for families of victims of Sept. 11th, held at The Hard Rock Cafe. While in Vegas, they recorded their first studio CD “Blues You Can Feel.” In the winter of 2002, they packed up the dogs & the guitars & made the move to Memphis where they made their partnership official by getting hitched on the rooftop of The Peabody Hotel & spent their wedding night playing a gig on Beale making music & sharing wedding cake with the audience. They are happy to have performed at many Beale Street venues including Wet Willie’s, The Hard Rock, Elvis Presley’s Memphis, The Blues City Cafe where they played a private party for HBO, Showtime & Team Tyson for The Rumble on The River Boxing Event, as well as at The King’s Palace Patio, The Tap Room, & for Memphis in May, Labor Day Music Festival, New Year’s Eve, etc at W.C. Handy’s Blues Hall & at The Rum Boogie, where they recorded their CD, “Live On Beale.” They are honored to have been finalists, coming in Second Place, in The 2005 and 2007 Memphis Blues Society “Battle of The Blues” Competitions. The 3rd time was the charm as they did win in 2009 and enjoyed the honor of representing the MBS in the 2010 International Blues Challenge on Beale Street in January 2010. (WHAT A THRILL!) Faultline has played at The Redbird’s Game/Auto Zone Park and at fundraisers for the MidSouth Arc and at The Rock 103/Celebrity Server Night at Bosco’s on the Square to benefit The Ronald McDonald House. They play at bars and clubs throughout Memphis, Arkansas & Mississippi including The Sheraton Casino in Tunica and The Southland Greyhound Park & Casino in West Memphis, Arkansas. Other local venues include: Hadley’s, Huey’s, T.J. Mulligan’s, Doc Watson’s, Dan McGuiness, Brookhaven Pub, The Service Station, J.R.’s, The Hog’s Head, Neil’s, Newby’s, Bob’s and The Crossings. In 2006 Faultline’s guitarist & band leader Steve Harper was the winner of the Guitar Center’s “King of the Blues” contest in Memphis, went on to be the district winner in Nashville and then, out of the thousands of guitarists who competed across the U.S., was 1 of 7 national finalists to perform at The House of Blues in Chicago where he was honored to have met and opened for the one and only BB King! Check out a video of his performance on You Tube. Pretty Cool. Faultline is also comprised of some great local talent and the NICEST guys in the world including the multi-talented Mr. John Gilreath who is the MASTER of the keys, blows some blues harp and sings as good as he wants to. John’s musical adventures have taken him all over the planet & we are thrilled that he has been our bandmate for about 10 years! Wahoo! We are also fortunate to share the stage with a GREAT HOT new YOUNG rhythm section! We are thrilled to have the verrry talented Josh White who is a-maz-ing on bass annnnnd Faultline’s newest (and youngest) member, Casey Triplett who truly tears it up on drums! He started playing in church at the age of 4 and he most definitely takes it to church every night! If you haven’t heard this wonderful new rhythm section yet you have just got to come check them out! You’ve got to hear their solos! from www.pattyharperfaultline.com