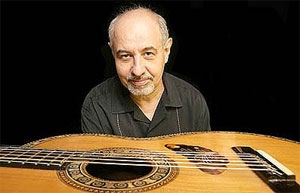 Paulo Bellinati was born in Sao Paulo, Brazil in 1950. He is one of Brazil’s most talented contemporary guitarists. He studied classical guitar under Isaias Saavio, and graduated from the Conservatory Dramatico e Musical in Sao Paulo. Bellinati spent 1975-1980 in Switzerland. He continued his musical studies at Geneva’s Conservatory of Music and taught at Lausanne’s Conservatory of Music. Bellinati also performed with his own band at many European jazz festivals, including the Montreux Jazz Festival and Ozone Jazz in Neuchatel. Bellinati has a long and active international career that has taken him all over the world, including Asia, Europe, and the Americas. He performs solo concerts and teaches master classes at many international guitar festivals. Bellinati also tours with Steve Swallow, the American bassist, the Brazilian singer Monica Salmaso and Antonio Carrasqueira the flutist. These and many other artists, including Joao Bosco and Gal Costa, Joao Pinheiro and Cesar Camargo Mariano and Edu Lobo and Chico Buarque are some of his recordings and performances. He won the Premio Sharp in Brazil, Brazil’s equivalent to a Grammy for his arrangements of the selections on Gal Costa’s CD “O Sorriso do Gato de Alice”. Bellinati is a highly respected musician and arranger. Bellinati transcribed, recorded and rediscovered the music of Annibal Augusto (Garoto), the great Brazilian guitarist-composer. Internationally, Garoto’s landmark recording, “The Guitar Works of Garoto”, as well as the two-volume Garoto edition have been praised for their historical importance and received critical acclaim. CD Review gave the CD a 5-star rating. As a composer, and multi-instrumentalist, Bellinati has written guitar solos, guitar and voice arrangements, guitar duos, trios, and quartets. Many of these pieces have been recorded on Bellinati’s albums “Guitares du Bresil”, Serenata”, or “Lira Brasileira”. “Afro-Sambas”, featuring Monica Salmaso as vocalist, features Paulo’s arrangements for complete afro-sambas composed by Vinicius De Moraes and Baden Powell. It was also a finalist in the 1997 Premio sharp awards. Paulo Bellinati draws heavily from Brazil’s rich musical tradition. Most of his compositions were written in Brazilian musical styles like Lundu, Modinha and Schottisch, Choro and Seresta. His contemporary approach to Brazilian folklore combines traditional forms with modern compositional techniques, and harmonies. Many important guitarists have recorded his works and performed them, including John Williams and The Los Angeles Guitar Quartet. Paulo Bellinati won the first prize in composition at the 8th Carrefour Mondial de la Guitare, Martinique, with Jongo, a solo guitar piece. John Williams recorded Jongo with two guitars in 1996 for his album “The Mantis and the Moon”. Two of Bellinati’s pieces were recorded by The Los Angeles Guitar Quartet in 1998 and 2000. They are A Furiosa (two guitars version) and Baiao de Gude (albums L.A.G.Q. Air