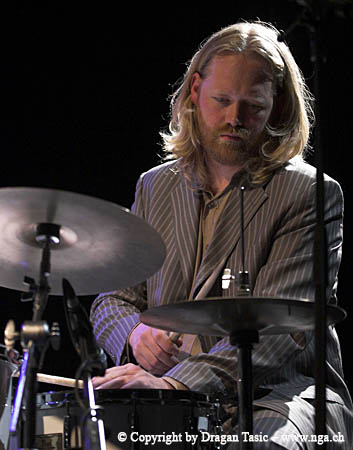 Born in 1968, he began drumming at the age of three to four years old. He was also a member of a schoolband when he was twelve and was given a drumkit almost immediately by his teacher. From that moment on, he was a drummer. Per Oddvar Johansen studied at Trondelag Music Conservatory from 1989 to 1992. Since 1990, he has been a professional musician and has performed in many different countries. More than 80 albums have been released featuring his well-known tastefulness. Six Spellemannsprisen, which are Norwegian Grammys, have been won by him. He has won two Spellemannsprisen (Norwegian Grammys) with Vigleik Storaws and three with Petter Wettre and Hans Mathisen. He is a leading Norwegian drummer and currently performs with Christian Wallumrod and Vigleik Storaas. Helge Lien and Trygve Seim are his current collaborators. Torben Snekkestad is also a member of his band. http://peroddvar.no