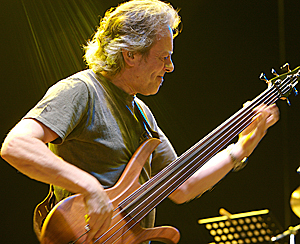 Percy Jones, a Fretless electric bassist, has carved his own place in progressive rock and jazz fusion through his longstanding association with Brand X and Tunnels. He is also considered one of the best bass players in the entire world by Bass Player magazine. Born in Wales, Percy Jones started his career as a prominent bass player with the Liverpool Scene and the Scaffold in England. He is also a founder of BRAND X. This pioneering jazz-rock fusion band, which he plays alongside Robin Lumley, Phil Collins, and John Goodsall of Genesis, is also his home. There are two solo albums and several compact discs he has released. Percy has collaborated with many other musicians, including Suzanne Vega and Bill Frisell. Percy has toured extensively throughout the United States, Europe, and Japan both as a solo artist and as a member of various bands. Percy endorses Ibanez bass guitars, Euphonic audio amplifiers, and DR strings. from http://www.bangtower.com