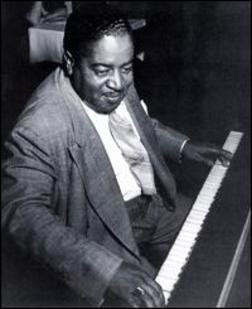 Peter (Pete) Johnson (March 25th, 1904 – March 23rd, 1967) was an American jazz pianist and boogie-woogie player. Pete Johnson was born in Kansas City (Missouri). He was buried in Meyer Hospital, Buffalo NY. His musical career began in 1922, when he was a drummer in Kansas City. He was a pianist and often accompanied Big Joe Turner from 1926 to 1938. He and Turner were both featured in the 1938 concert, From Spirituals to Swing at Carnegie Hall. The concert launched a boogie/woogie craze. Turner, Meade Lux Lewis, and Albert Ammons were among the performers at the concert. They also worked together at Cafe Society, where they also toured and recorded together. “Roll ’em Pete”, which featured Turner singing and Johnson playing piano, was the first record in rock and roll. Their “Johnson And Turner Blues” was another self-referential title. He also recorded and wrote “Rocket 88 boogie” in 1949. This two-sided instrumental is not to be confused the 1951 Ike Turner hit “Rocket 88”. Johnson recorded an early concept album Pete’s House Warmin’ in the late ’40s. He starts by playing solo in a new house and then is joined by J. C. Higgenbotham and J.C. Heard and other Kansas City musicians. Each member of the group performs a solo song, backed by Pete. Then the entire group jams together. Johnson’s ability to work well with a group and demonstrate his impressive stride piano skills are evident on this album. He moved to Buffalo, New York in 1950. Despite his declining health, he continued to tour and record, including with Jimmy Rushing, Turner and Jazz at The Philharmonic. In 1958, he was partially paralysed after a stroke. His final years were characterized by poverty and illness. Johnson played the right hand in a version “Roll ‘Em Peter” at Hammond’s January 1967 concert “Spirituals to Swing”. This was two months before his passing. At the age of 62, he died at Meyer Hospital in Buffalo, New York, in March 1967. Text contributed by users is available under Creative Commons By–SA License. It may also be available under GNU FDL.