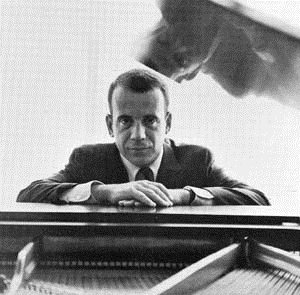 Pete Jolly, born Peter Ceragioli Jr., June 5, 1932 in New Haven (CT); died November 6, 2004 in Pasadena. California. He was an American West Coast jazz pianist, accordionist, and is probably best known for his performances of TV themes and other movie soundtracks. At age three, he began playing the accordion and was featured on the radio show Hobby Lobby at seven years old. He was nominated in 1963 for a Grammy Award for his song “Little Bird”, which was a minor hit on Fred Astaire’s Ava label. In 1964, he founded the Pete Jolly Trio. He recorded many albums with the Trio and as a solo performer, including one in 2000 that was a collaboration between Jan Lundgren, a Swedish jazz pianist. Buddy DeFranco and Art Pepper were also among his collaborators. He was also a long-time collaborator with Ray Conniff, EZ music director and arranger. Jolly’s music can also be heard on TV programs like The Love Boat, I Spy and Mannix. There are also hundreds of soundtracks for movies. After being hospitalized between August and November 2004, he died in Pasadena (California) from complications from bone marrow cancer. Text contributed by users is available under Creative Commons By–SA License. It may also be available under GNU FDL.