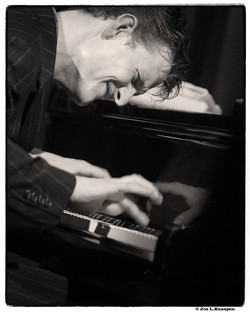 He has performed on stage with jazz legends such as Wynton Marsalis and Elvin Jones, Chick Corea, Johnny Griffin, Chris Potter, John Clayton, John Clayton, Johnny Griffin, Johnny Griffin, Chris Potter, and Johnny Griffin. Curtis Fuller, Larry Grenadier and Greg Hutchinson recorded him. In 2001, his album, “New York Trio”, was released. This earned him international acclaim. Peter Beets was born in The Hague on the 12th June 1971. He was raised in a musical family. His mother, a music pedagogue and his father, a jazz lover who loves Oscar Peterson and Art Blakey, were his first music teachers. Marius and Alexander are two of the musical siblings. Peter began piano lessons in Groenlo at six years old. Although the parents didn’t initially associate the term “musician”, with the word career, music is clearly in the blood. Alexander (1968), and Marius (1966) both became professional musicians on tenor and string bass. Peter began studying at The Hague’s Royal Conservatory in 1992 after graduating college. Although he studied music and law, the jazz virus grew stronger and he decided that music was his true passion. The brothers were known as “The Beets Brothers” from 1985. Peter was awarded the Pall Mall Swing Award in 1988 and the Princess Christina Award in 1990. Peter’s career took off from that point. The first recording of The Beets Brothers was released in 1990. Two more were recorded, School is Closed Now (1993), and Brotherwise (1995). Peter recorded “First Date”, a trio album with Jeff Hamilton, who was the driving force behind Monty Alexander’s and Oscar Peterson’s recordings. Peter was a popular pianist in the Netherlands and abroad. He played with Dee Daniels, Rita Reys, and Deborah Brown. He completed his conservatory studies in 1998 and was awarded the Prix Martial Solal in Paris. He was also appointed regular pianist to “The Jazz Orchestra of the Concertgebouw” that year. Peter recorded a live recording with trombone player and jazz legend Curtis Fuller in 1999. He also won the Concours de Solistes de Jazz, Monaco, that year. In 2000, he recorded “Powerhouse”, and in 2001, “All Or Nothing At All.” He recorded “New York Trio”, a CD with Rodney Whitaker’s rhythm duo and Willie Jones III. This was the first Criss Cross CD. He recorded the sequel, “New York Trio Page Two”, with Larry Grenadier, the legendary bass player. In 2007, he released a third Criss Cross CD, this time featuring Reginald Veal, the bassist, and Herlin Riley, the drummer. Criss cross released “New Groove” in 2007. Beets performed without drums but with an exciting line-up that included guitar, piano, and bass. Peter returned to New York in October 2010 to record “Chopin meets the Blues”, his fifth CD for Criss Cross. It features jazz arrangements of the Polish grandmaster’s music. He plays on this record with Joe Cohn (guitar), Reuben Rogers(bass) and Greg Hutchinson (“drums”), with whom he also occasionally plays throughout the year. He recorded another album with this rhythm section in February 2013. The CD “Portrait of Peterson”, which he calls his greatest idol, is a tribute to Oscar Peterson. Peter Beets has been touring successfully with his trio in all of Europe, as well as in Asia and Russia. For a week, he played at “Birdland”, a New York club. He also performed at the Lincoln Center in New York. His performances at Salle Pleyel, Seattle’s Jazz Alley and Yoshi’s in Oakland are also memorable. Peter’s trio has been performing there regularly since April 2005, after a remarkable duet of two grand pianos and Chick Corea in Amsterdam Concertgebouw’s main hall. After the success of their first Dutch theatre tour, “From Bach to Blues”, (2003), it was time for a return to the theatres. The program “Chopin meets the Blues” was presented in 2005, followed by “Porgy and Bess”, (2006) which featured his arrangements of the Gershwin opera. He returned to the theatres in fall 2007 with “The Blues goes Latin”, a program that highlights Latin American rhythms. Peter’s trio toured extensively throughout 2008 in foreign countries and returned to the Dutch theaters in 2009 with “a Tribute to Oscar Peterson”, a dedication to one of his greatest heroes. Louis van Dyke, a Dutch pianist legend, invited Peter to join him on a lengthy theatre tour called The Piano Kings. In the next theatre season Peter Beets collaborated with the internationally renowned Rosenberg Trio. He will continue to develop his program “the Blues goes Latin” for the Dutch theatres next year. from http://www.peterbeets.com