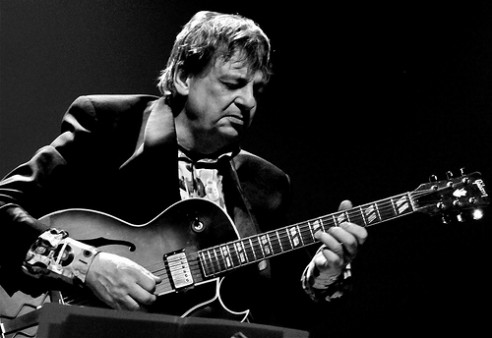 Charles Mingus has called Philip Catherine the “Young Django”, and after hearing his fast-firing, expressively melodic acoustic, it is clear that he was inspired by the music of Charles Mingus. Catherine was born to a Belgian mother and an English father in London during World War II. He returned to Brussels with his family after the war and learned to play guitar. He became a professional guitarist at age 17. John McLaughlin and Larry Coryell were the inspirations for Catherine’s interest in jazz-rock. He played guitar with Jean-Luc Ponty’s Experience from 1970 through 1972, before taking a year to study at Boston’s Berklee School. In Europe, he started Pork Pie in 1973. He also worked with Stephane Grappelli and Niels-Henning Orsted Pedersen in a duo. Catherine is most well-known for her duets with Coryell. These duo albums were recorded in Berlin in 1976 and led to some beautiful duo albums for Elektra. They also helped Coryell return to the acoustic instrument. (c) Richard S. Ginell (c), 2010 Rovi Corporation, www.allmusic.com