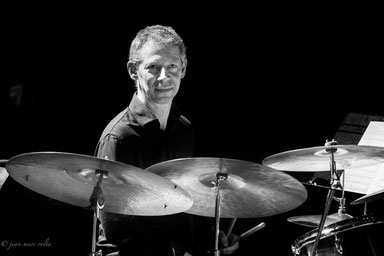 Philippe Soirat was born in Menton, France in 1961. He was self-taught and studied at the Nice Contemporary Music Center as well as the Monaco Conservatory. In 1986, he settled in Paris and began to work in an informal jazz school that was based on the exchange of ideas among musicians. Concerts came thick and fast and he has accompanied most musicians on the french and international jazz scene, such as Barney Wilen, Ricky Ford, Lee Konitz, Yannick Rieu, Lionel et Stephane Belmondo, Lou Donaldson, Dee Dee Bridgewater, Ray Brown, Laurent DeWilde, Jonny Griffin, Mark Turner, Phil Woods, Steve Grossman… from www.philippesoirat.com