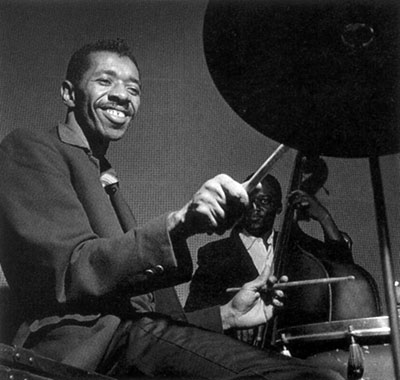 Philly Joe Jones was born July 15, 1923 in Philadelphia, Pennsylvania with the name Joseph Rudolph Jones. His mother was a piano teacher who taught him basic music skills. He also learned the drums from Charles Wilcoxon and Cozy Cole during his childhood. Art Blakey, then a younger Max Roach, gave him valuable advice. To distinguish himself from Jo Jones, the mainstay of Count Basie’s rhythm section, he became “Philly Joe” Jones. Jo Jones set the standard for rhythm section in the 30’s and 40s. Philly Joe would follow suit in the 50’s. He was a member of the New York rhythm and blues scene when he started playing in them in the 40’s. Johnny Griffin and Joe Morris were the co-leaders of his first recording group. They also recorded with Matthew Gee, Elmo Hope and Percy Heath on trombone. They played some Bud Powell pieces and standard Monk for a while, but then they switched back to the blues to make money. Philly was unhappy with the music and left the group to join the established Ben Webster Lee Konitz Zoot Sims Tony Scott and Tadd Dameron. As a drummer in Philadelphia for celebrities like Dexter Gordon or Fats Navarro, he was a regular. After serving a brief time in the army, he left to become a streetcar driver. The reason he was fired was that he would sometimes stop the steetcar carrying people and then go in to play at the jazz clubs. His work with Tadd Dameron from the late 40’s up to 1953, and his time with Miles Davis 1952-58 were two of the major influences in Philly Joe’s life. Dameron helped him become a drummer in a big band and a soloist. Miles Davis, the trumpeter, was their most important connection. They would stop in cities around the US to play a gig with local talent. “Philly Joe Jones would accompany me from one city to the next, playing with local musicians. Philly would get some men together, then he would take the lead and show up and we would play a gig. This shit was causing me to shiver because the musicians weren’t familiar with the arrangements, and sometimes didn’t even know the tunes. (Miles’ Autobiography 179). Philly called it “a drag”, because the local talent wasn’t always up to standard. From 52 to 55, this continued. After a booking at Baltimore’s club, in 1955, Miles was found by Philly Joe and hired Red Garland, a Texas pianist, and Paul Chambers, a virtuoso bassist. Chambers was then only 20 years old. John Coltrane was invited to perform at the Miles arrangement of Two Bass Hit. Miles told Jones after the gig, “I believe this is it.” Jones agreed, saying that the group had played their first concert together. He said, “The first time it happened, we just looked at each other and said, “Hum here it is.” There’s musical telepathy. Five people know exactly what is going to happen next. This group became famous when the Miles Davis Quintet was baptized. Chambers and Jones would form the rhythm section that was so popular with soloists like Art Pepper and Sonny Rollins. Jones was a house drummer on numerous Blue Note records and was a regular performer for Prestige, Riverside and Blue Note record labels. His sound has been called “too loud” and “like a machine gunner.” To appreciate his energy and precision, one must listen carefully. Coltrane’s Blue Train album is a great example of Jones’ playing. Jones’s first album, Blue Train, was released in 1958. It was an LP for Riverside Records. His album featured players who would be well-known in the business, including Nat Adderley and Julian Priester as well as Johnny Griffin, Tommy Flanagan, and Tommy Flanagan. Jones was a great star in his prime. He was voted the star on drums by Downbeat magazine in the 1957 and 1962 categories. In 1961, he was second to Max Roach. Jones’ career suffered a dramatic decline in 1962. He was almost forgotten and ignored. Elvin Jones, a drummer with John Coltrane’s quartet, was one reason. This may have been the reason Jones immigrated to England in 1968. He made a significant impact on the local talent as a teacher. He returned to New York, but was not at the forefront of the jazz scene on the west coast. He worked in Philadelphia, his hometown. He recorded an LP entitled Mean What You Say for Sonet in 1977. This is a good example of later-day bebop. In the 1980’s Jones formed Dameronia, which was a group that played original recordings of Tadd Dameron’s music. The result was two Uptown label albums in 82 and in 84, which were very well received by critics. His electrifying solos, however, would end on August 30, 1985 when he died from a heart attack at his Philadelphia home. – Duke edu