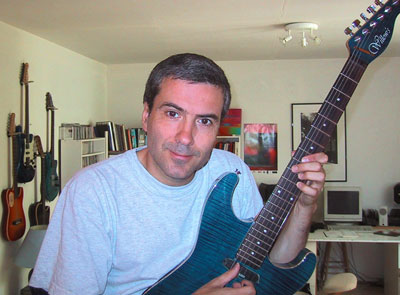 Pierrejean Gaucher was a child of God who loved drawing. He started playing the guitar when he was 16. After graduating high school, he wanted to be a musician and enrolled at the Berklee School of Boston in 1981. After returning to France, he focused exclusively on his band Abus Dangereux. In 1986, the band changed its name to Abus and helped create the French scene. They released 8 albums and gave more than 400 concerts across France and abroad. Numerous illustrious musicians have crossed paths with Abus including Randy Brecker and Robert Thomas Jr. Bobby Rangell. Stephane Belmondo was also a member of the band, as well as Olivier Hutman and Etienne Mappe. Pierrejean Gaucher has also recorded for many artists, most notably the Uzeb rhythm section. He was a prolific composer for Abus and received many commissions (theater music, contemporary music, dance). In 1987, he created the theme music for Philippe Adler’s television show “Jazz 6”. He formed the New Trio in 1992 with Andre Charlier, drummer, and Daniel Yvinec, bass player. The music press praised their two albums as some of the most innovative projects of the time. The New Trio was formed in 1994 at the request French festivals and paid tribute to Frank Zappa who had died the previous year. The “Zappe Zappa” project is still in touring and draws a crowd that far exceeds regular jazz audiences. In March 1998, a live CD was released by this band. He records and tours with the Phileas Band in 2000. In 2002, he forms a duo with Christophe Godin (2G), a french guitarist. He creates his musical adventure, The Fontaine’s Fables, in 2005. He is also a prolific teacher, teaching classes at several French schools (like the CMDL of Didier Lockwood and the M.A.I. Nancy In 1997, he released a video about improvisation and a book project on triads. He is asked by Daniel Goyone, a french pianist, to take part in a book on rhythm study. He wrote the book “Guitaristes” in 2004. from www.pierrejeangaucher.com