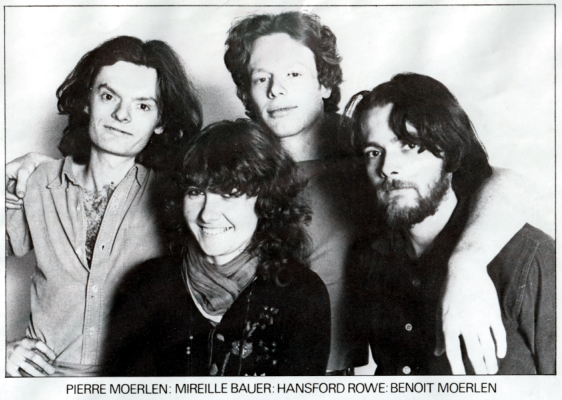 Pierre Moerlen’s Gong jazz fusion group is quite different from the original Gong, the psychedelic-space-rock band led by Daevid Alley. The prominent use of mallet drums, such as marimba, vibraphone and xylophone in rock/jazz contexts makes it a unique sound. It’s comparable to the fusion-influenced output that many other bands from the Canterbury scene were producing around the same time. Gong drummer Pierre Moerlen was appointed to lead the band after a series of lineup changes, including the departures of founding members Daevid Allan and Gilli Smyth. Moerlen created a new Gong line-up with his brother Benoit, US-born bassist Hansford Rowe, and a rotating group of session guitarists including Allan Holdsworth and Mike Oldfield (ex-Rolling Stone Mick Taylor) and Bon Lozaga. Gazeuse was their second album. In North America, Expresso was first called Expresso II in 1977. Then Expresso II was released in 1978. After the Virgin contract was signed, Moerlen changed Pierre Moerlen’s Gong to the group’s name, likely to distance it from its previous, very different incarnation. The group released Downwind in 1979. This was a rock/pop-oriented album with occasional lead vocals from Moerlen and a guest appearance by Steve Winwood. They released Time is the Key in 1979, which took the group further into pop/rock territory. In 1980, Pierre Moerlen’s Gong Live was released. Later that year, a second studio album, Leave It Open, was also released. Pierre Moerlen’s Gong incarnation had already slowed down its activities and did not release another record until 1986’s Scientology-inspired Broken Through, which featured members of Tribute. Soon after, the group disbanded quietly. Lozaga, Rowe and Benoit Molen formed Gongzilla in early 1990s. They released four albums, which were an extension of the percussive Fusion that the original group brought. Moerlen was with them on their 2002 European tour. Pierre Moerlen, who was on the third of May 2005 unexpectedly died from natural causes, as rehearsals began for a new line-up of Pierre Moerlen’s Gong. from http://en.wikipedia.org