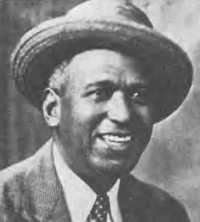 Clarence “Pine Top” Smith was among the first pianists to record a boogie woogie solo piano. “Pine Top’s Boogie Woogie”, a 1928 recording, was the first to be labeled such. It had a significant influence on all subsequent pieces in this style. Pine Top was a performer on the TOBA and minstrel circuits in the 1920s, along with Mamie Smith, Butter Beans, and Susie, among other vaudeville acts. He also performed solo at many rent parties, taverns, and whorehouses. Smith was shot to death in an accident at a Chicago dance in 1929. Source: www.redhotjazz.com