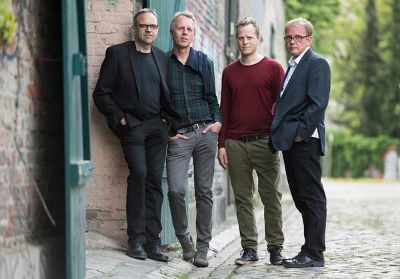 Since around twenty years, polwechsel has been working at the intersection of improvised and contemporary music. They are one of the most important groups in this field, and they were founded at a time when music was changing. This shift was driven by a small group of musicians, particularly in vienna and berlin, and resulted in profound changes in the development and evolution of experimental and improvised music. The relationships between avant-garde and high art, pop, and other subcultures were being re-evaluated. The musicians involved in this transition sometimes drew from improvisational collectives of sixties, but also referenced influences from the concentrated sound and noise worlds created by new music composers. They kept a critical distance from the energy and expressiveness that free improvisation can bring, as well as embrace genres like rock music and electronic club culture. They challenged the once strongly defended view of a dichotomy in composition and improvisation. This has led to musical concepts and performance practices that are difficult to describe using traditional terms. The first group of multi-faceted musicians to develop aesthetic strategies and performance techniques was polwechsel. This radical form of “reductionism” was soon recognized. It involved a reduction of the usual musical linguisticality and a micro exploration of single musical events. A deceleration of musical processes and immersive listening. An eschewing the dramaturgy and manipulation of musical forms, a focus on the physical and fleeting nature of sound and an awareness of the other side of sound, such as background noises, silence and disruptions in musical articulation. The music seemed to revolt against the amount of information that we are bombarded with via social media. It also invited us to explore a whole new world in the overlooked, imperfect, and confusing details. This was an ordinary world, or counterworld, but it is certainly not refuge. Perhaps the minimalist, measured gesture that created this music was also skeptical of the post-fordist creative enthusiasm and innovative drive. The reductionism of that time was a school for perception that connected the vienna’s experimental musicians to berlin echtzeitmusik and japanese Onkyo. It is still a common horizon for that generation of musicians but belongs to the future. Michael Moser stated about the work that he did at that time that “to reduce further would be to stop playing. That is to say, to cease to exist. The situation required that the music be pushed in a different direction. The changes in direction and perspective of polwechsel have been reflected in different instruments and collaborations, such as with the laptop musician christian fennesz at wrapped islands (2002). Since archives of the north (2006), the current lineup includes the two percussionists martin brandlmayr and burkhard beins. They bring a wide variety of musical experiences to the group from experimental rock to electro-acoustic music improvisation. The ensemble has been introducing musical aspects to the group that were either not present or limited to, for example, tonal relationships and harmony, rhythm, as well as questions about form, musical space, and expressivity. In light of these experiences, a reconsideration has begun of all musical expressions. The most striking thing about the group’s early days is the differences in their approaches. This was already evident and is now being broken up into many musical concepts. matthias haenisch, www.polwechsel.com