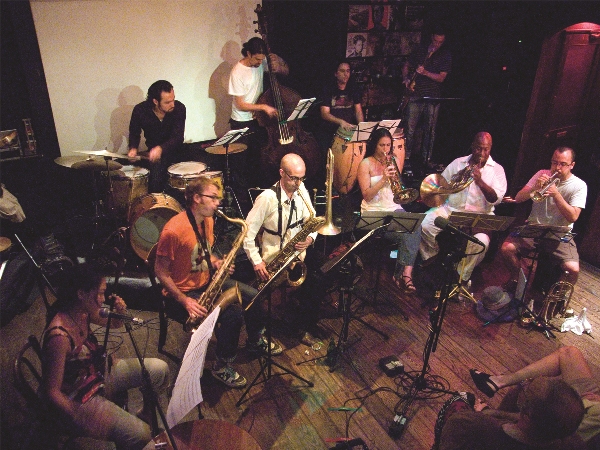 Positive Catastrophe was created by Taylor Ho Bynum, Abraham Gomez Delgado and Abraham Gomez Delgado. Bynum is described as “animated like a vintage Loony tune…one of jazz’s most exciting figures” (Time Out Chicago). Global Rhythm Magazine has called Gomez-Delgado “the new century’s mad scientist” for creating a musical mix so wildly wrong that it is impossible to be right. After almost a decade of friendship, collaboration, Bynum and Gomez­Delgado formed Positive Catastrophe (a “raucous 10 piece ensemble…which nails their distinctive blend of Afro–Cuban rhythms and freewheelingimprovisation” (The New York Times). The group includes some of New York’s best jazz and salsa musicians. They are also all bandleaders and composers. The exceptional musicianship and fluidity of the musicians, as well as their ability to play multiple genres and use a unique instrumentation (accordion, guitar, french horn) and dramatic vocalists who are comfortable singing in multiple languages make Positive Catastrophe “blend all kinds of salsa to Sun Ra” (The Village Voice). Cuneiform Records released Positive Catastrophe’s debut album Garabatos Volume One in May 2009. It received rave reviews. Time Out New York said that “It’s an amazing doozy: A wonderfully lush and unorthodox Latin-jazz party album…full of swagger, groove, and it combines Mingus-esque polyphonic momentum and vibrantly off-kilter World-funk.” The New York Press says that “Pos-Cat maintains the playful, even giddy, vibe as it bends and twists its Latin, swing and progressive vibes so they’re all recognizable, but deliciously warped If you’ve been hungering to hear Latin-based jazz in a new light, your prayers have been answered.” from http://www.positivecatastrophe.com