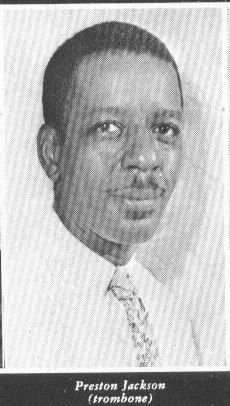 James Preston McDonald, better known by his stage name Preston Jackson (January 3, 1902 – November 12, 1983) was an American jazz trombonist. Jackson was born in New Orleans and moved to Chicago in 1917, but did not pick up trombone until 1920; within nine months he began playing professionally. Among his teachers in the early 1920s were Roy Palmer and Honore Dutrey. He sometimes deputized for Dutrey in King Oliver’s band. In the 1920s he played with Tig Chambers, Al Simone, Eli Rice, and Art Sims, and recorded with Bernie Young and his Creole Jazz Band at the Marsh Laboratories (1923) and Richard M. Jones. In the 1930s he played with Dave Peyton (1930), Erskine Tate, Louis Armstrong (1931-32), Half Pint Jaxon (1933), Carroll Dickerson, Jimmie Noone, Roy Eldridge, Walter Barnes, Johnny Long (1939), and Zilner Randolph’s W.P.A. Band. He also played on Johnny Dodds’s last recordings in 1940. In the 1940s he began playing less often, but his career saw a resurgence late in the 1950s, playing with Lil Armstrong. Moving back to his childhood home of New Orleans in the 1960s, he began playing at Preservation Hall where he would continue to be featured for the rest of his life. He played with Little Brother Montgomery in 1969 and with Kid Thomas’s New Orleans Joymakers in Europe in 1973-74. In addition to many recordings made as a side man, Jackson recorded as a leader in 1926 and 1946, then issued his own album in 1972 and a split album with Benny Waters the following year. Jackson died in Blytheville, Arkansas in November 1983. from wikipedia