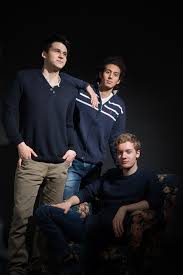 PRIM was founded in Vienna by three musicians from diverse musical backgrounds in October 2015. Inspiring themselves from contemporary groups like the Swedish jazz trio e.s.t. They set out to create their own melodies, drawing inspiration from The Avishai Cohen Trio and Swedish jazz trio e.s.t. Felix Biller, a German pianist, uses a variety of styles. His technique is virtuosic, but he manages to create beautiful minimalist lines. Konuray Mutluer plays the bass in the trio. After moving from Istanbul to Vienna to study, Konuray Mutluer played in several groups before joining PRIM. His melodic bass playing, influenced by middle-eastern and latin music, is the foundation of the band’s harmonic structure. The trio lost their founder member, Ralph Dammerer in september 2016. They found a replacement in Sherif Abdalla, an Egyptian musician who brings a fresh rhythmic vibe to the band. His virtuosic and impulsive playing complement the band’s sound. http://prim-trio.at