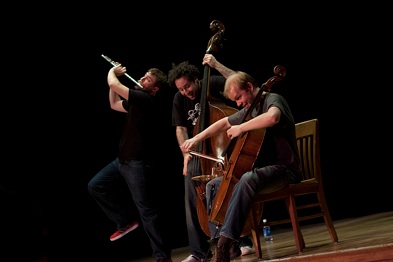 PROJECT Trio takes chamber music to new heights. Greg Pattillo (flute), Eric Stephenson (cello), and Peter Seymour (bass) are pushing the boundaries in chamber music by combining classical, jazz, hip hop, rock, and jazz. The Trio entertains enthusiastic audiences from all ages in clubs, concert halls, and classrooms across the globe. The Trio has received a wide range of praises from Downbeat Magazine which describes PROJECT Trio’s music as “packed with musicianship and joy, and surprise.” The New York Times calls Greg Pattillo the “best beatboxing flutist in the world” and the Wall Street Journal, which hails their “unique performances.” The Trio is now in its sixth season. It was formed out of a shared passion for performing high-energy, high quality music to diverse audiences. Through their original performances and recordings, as well as their YouTube channel with over 7 million views and 78,000 subscribers that has more than 71,000,000 views, PROJECT Trio is one of the most viewed instrumental ensembles online, they are attracting new audiences to classical music. The Trio performs more than 70 concerts per year and plays to audiences of all ages at venues around the globe, including Carnegie Hall where they made their debut in 2010. The Trio’s extensive performing schedule is not the only thing they do. They also dedicate themselves to arts education and inspire a new generation of music-lovers. The Trio’s 2012-13 season featured concerts with the Charlotte Symphony and Los Angeles Chamber Orchestra, New Jersey Symphony and Walla Walla Symphony. The Trio will be performing masterclasses at schools, universities, festivals, and other venues across the US, including New York and New Hampshire, Missouri and Indiana, Illinois, Kansas and Ohio. The U.S. Department of State’s Bureau of Educational and Cultural Affairs in partnership with American Voices selected PROJECT Trio as one of the ensembles to participate in their 2012-2013 season of American Music Abroad. They were selected for their musical excellence, educational ability, and will be touring throughout the former Soviet Union to perform original American music through concerts, master classes workshops, jam sessions, media outreach, and master classes. The Trio will also be performing with the Neubrandenburg Symphony Orchestra this fall, as well as a second tour to Germany. The Trio performed their first concert in 2012 as Family Concert Artists In Residence with the Los Angeles Chamber Orchestra as part of a three year residency. Last season also saw performances by the Saint Louis Symphony and Charlotte Symphony as well as tours to France and Canada. The Trio has also been to Australia and Hong Kong. Project Trio’s discography features three recordings, a DVD entitled PROJECT Trio Live in Concert and a fourth CD due for release in fall 2012 on Harmonyville Records. Tummy Touch Records released their catalog-spanning Random Roads Collection on May 8, 2012. It quickly rose to No. Tummy Touch Records released their catalog-spanning Random Roads Collection on May 8, 2012, and it quickly rose to No. 2 and 15, respectively, on Billboard’s US and Canadian classical music charts. In a rare feat, it also debuted at No. 17 on the jazz charts of the trade magazine. After their release, each PROJECT Trio recording reached the top of iTunes’s charts. Jazz Review praised their disc Project Trio as “a glorious celebration the music of our times.” It features heavy-hitting originals like Dr. Nick and Fast, as well as reinterpretations by Guns and Roses of Sweet Child O’ Mine and Dave Brubeck of Blue Rondo a la Turk. With 12 original compositions ranging from jazz to classical, hip-hop and experimental acoustic, their debut CD Winter in June shows the versatility of PROJECT Trio. Brooklyn, their follow-up disc, features well-known songs from their live shows, including covers and originals, as well as complete overhauls by Theolonius Monk and Duke Ellington. They also include their Brooklyn Suite, a collection tone poems inspired by the world around them in Brooklyn. They met at the Cleveland Institute of Music and quickly realized there wasn’t a repertoire that was written specifically for their unique combination of cello, bass, and flute. The members were forced to create and arrange their own music, which is published on the Harmonyville label. The trio’s original compositions are influenced by jazz, hip-hop beatbox, and rock. You can hear their music in Smart Car and Nike commercials. Pattillo was commissioned by the National Flute Association to write “Three Beats For Beatbox Flute.” Greg Pattillo performed his beatbox style with Jay Leno’s Tonight Show orchestra. PROJECT Trio is dedicated to engaging today’s younger audience. They have led workshops for more than 100,000 students across three continents, as well as in over 35 US states. Because of their YouTube presence and appearances on MTV and Nickelodeon, PROJECT Trio can be instantly recognized by students of all ages. The educational programs they offer are tailored to the National Standards for Music Education. They have specialized curricula for all ages, from elementary school students to college. This summer, they held their first camp at the Bay View Music Festival. In 2005, Pattillo and Stephenson, based in Brooklyn, New York, founded PROJECT Trio Boulder, Colorado. In the beginning, the group had the idea of doing one-week “projects” in different US cities. Each project would include education/community outreach events as well as concerts of classical music and their own music. In 2006, Greg Pattillo’s Beatbox Flute video became a viral hit on YouTube and received millions of views within its first week. PROJECT Trio is now one of the most popular and interesting instrumental ensembles in the world, reaching out to all ages via the Internet, live performances and recordings. Visit www.projecttrio.com for more information about PROJECT Trio.