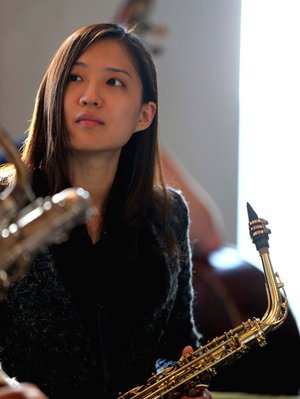 Born in South Korea, I’m a South Korean alto Saxophonist and Jazz Composer. I currently reside in New York, NY since 2018. My first album, titled “The Real Blue”, was released by Cellar Live on June 21st 2019, with an all-star lineup that included Jeremy Manasia on alto saxophonist and Willie Jones III, on drums, as well as rising stars Luke Sellick and Sabeth Peez on bass and vocals. I am scheduled to release another album through SWIT Records with Spanish jazz legend Ignasi Terza and his trio. This was recorded at Jamboree Club in Barcelona during the GREC Jazz Festival. 2018-12-16 Pureum Jin Recording Session_BW_4. 2018.12.16 Pureum Jin Recording Sessions_BW_4.jpg In summer 2018, I moved to New York after having spent a year in Charlottesville. This was just a few months after I graduated from MSM in 2017. C’ville is a place I frequent for performances. As a member John D’earth’s sextet, I was active in weekly performances at Miller’s Downtown Mall. As a guest performer with UVa Jazz Ensemble, I also participated in events like Jazz in the Park in Staunton and The Charlottesville Jazz Society. WTJU hosted events that included Miho Hazama’s Big Band playing Thelonious Monk’s music. As a member Jihye Lee Jazz Orchestra with Ted Nash, Sean Jones and other musicians, I performed at DC Jazz Fest. I was invited to UVa by Lauren Sevian, a Grammy-winning baritone saxophonist, as a guest performer for the ‘Jazz 4 Justice” concert. pureum-jin_ignasi-terraza_x_fernando-prats-1639.jpg Prior to obtaining my Master’s at MSM, I’ve been active in both Korea and international jazz scenes, playing in international jazz festivals including Edinburgh Jazz