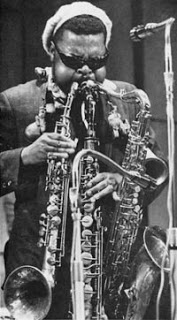 Rahsaan Roland (from 1936 to 1977) was an American blind jazz saxophonist. He is perhaps most famous for his ability of playing more than one instrument at once. Kirk was born Ronald Kirk in Columbus, Ohio on 7 August 1936. However, he felt compelled to create Roland by transposing two letters from his first name. In 1970, he had another dream that led him to add Rahsaan as his last name. Although his playing was rooted in soul or hard beat, Kirk’s extensive knowledge of jazz history enabled him to draw convincingly from any aspect of the music’s past, including swing, ragtime, and free jazz. Kirk was also a regular listener to classical and popular music. Kirk collected many musical instruments, including clarinets and saxophones. His primary instruments were the tenor saxophone and two obscure saxophones, the manzello and stritch. The latter is a straight alto sax without the bell’s distinctive upturned bell. Kirk modified the instruments to suit his simultaneous playing style. Kirk often appeared on stage with all three of his horns around his neck. He also had a variety other instruments such as flutes and whistles. Kirk was also proficient on the trumpet and played cor anglais, harmonica, and recorders. Kirk often used unusual instruments, or combinations of parts, such as a saxophone mouthpiece to play a trumpet or a nose flute. His music also included many other sounds, including alarm clocks and whistles, sirens and primitive electronic sounds, before such sounds were commonplace. Kirk, in addition to his saxophones and innovative flautist techniques, was also an important one. One technique was to sing into the flute while you were playing. This technique was later adopted by many other players including Ian Anderson of Jethro Tull and Jeremy Steig. Another option was to use the transverse flute standard as a nose flute. Text contributed by users is available under Creative Commons By–SA License. It may also be available under GNU FDL.