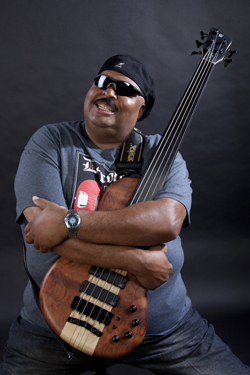 At just twenty years old, Detroit bassist Ralphe was already recording and touring. Ralphe Armstrong, however, isn’t your average musician, regardless of whether he plays electric bass guitar or bass violin. HomeBASS was released on Mack Avenue Records’ Detroit Music Factory imprint in November 2013. It is a tribute to his roots and a great album. Ralphe says, “This record is dedicated the people of Detroit.” HomeBASS is a collection of Detroit’s best jazz musicians who performed at the 1996 Detroit Jazz Festival. The all-star group includes Rayce Biggs, pianist Henry Gibson and Gayelynn MacKinney. Audrey Northington is the vocalist. Toty Viola, a Sicilian guitarist, was also on the stage. Detroit fusion at its finest. The energy and musicianship are evident on “Miles We Got To Go.” Son of legendary visual artist/musician/composer/poet/storyteller Howard “Louie Bluie” Armstrong, Ralphe came from a musical family. His father, a violin player and virtuoso was part of the last African American string band. He was also declared a National Treasure in the National Endowment for the Arts. His aunt was a guitarist; his brother was with Miles Davis. His charismatic and stylish uncle Lee (L.C. When Ralphe was seven years old, Crockett inspired him to take up the bass. Ralphe, 16, had just completed his classical and jazz musical training at Michigan’s Interlochen Arts Academy in 1974. He auditioned and was offered a place with John McLaughlin’s Mahavishnu Orchestra. This orchestra is known for beating out Jaco Pastorius. Ralphe recalls, “I got the job due to my fretless bass.” McLaughlin and Jaco loved the sound. According to the legend, Jaco went home and removed the frets from the bass. In the following years Ralphe would tour and record with a number of illustrious musicians, including Frank Zappa, the Mother’s of Invention and Herbie Hancock. The inventor and originator of the fusion fretless bass, Ralphe was soon noticed by Gibson(r), Guitar Corporation. He was selected to endorse the company as well as serving as an advisor. He was instrumental in developing Gibson basses such as the Ripper and G-3. Rodney Whitaker, a world-famous Detroit bass player and educator, says that Ralphe is “the torchbearer for the Detroit bass tradition.” “He studied with Ron Carter, James Jamerson, and he’s got everything.” Despite being at the peak of his career, Ralphe decided to retire from touring for the majority of the 1980s in order to be closer to his family and to raise his children. This was much to the delight and joy of many Detroit musicians who were able to enjoy his presence on the local circuit. Ralphe, a lifelong fan of Detroit’s music culture, was equally at home in Detroit clubs as in any other stadium. Ralphe Armstrong, a musician who embodies Detroit’s variety of style and talent, has been an ambassador for the Detroit sound to the rest of the globe. Now that his family is grown, Ralphe can be seen on the international stage recording and playing with a wide range of musical genres, including Eminem’s D-12, Roger Daltrey, and Sting. Ralphe has performed all genres of music, from jazz to pop, orchestral theatre to hip-hop, and always with his trademark passion, power, and precision. As Ralphe puts it, “Detroit keeps producing more great musicians than any other place on Earth, and that’s a true story.” from www.detroitmusicfactory.com