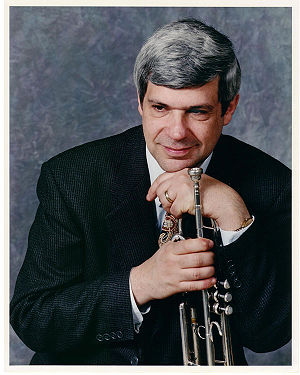 Randy Sandke has performed in clubs, festivals, and concerts all over the globe. He has performed throughout Japan, Canada, India, the U.S. and Canada more than 40 times. Randy has recorded more than twenty albums as a leader, mostly on the Concord, Nagel-Heyer and Evening Star labels. Gerard Beilderman published a discography of recent recordings that runs to 53 pages. Mr. Sandke has recorded with the following artists: Benny Goodman and Kenny Barron; Dick Hyman, Mulgrew Miller, Bill Charlap; Eric Reed, Frank Wess; Ray Anderson; Chris Potter; Sweets Edison, Flip Philips, Scott Hamilton, Wycliffe Gardiner, Warren Vache, Mel Lewis. Mel Torme and Jon Hendricks are among the singers. Randy Sandke has been a part of the soundtracks to several films including Francis Ford Coppolas The Cotton Club and Neil Simons Brighton beach Memories. He also played in five Woody Allen movies. Randy was a part of the Broadway production of Chicago with Beebe neuwirth at The City Center. This production launched the highly successful revivals on screen and stage. Randy also performed the solo trumpet performance of Harry James on stage, which is the highlight of the show Fosse. He recorded all the trumpet solos for Ma Raineys Black Bottom, starring WhoopeeGoldberg. He has appeared on television in Japan and other countries, including Germany, Sweden, Switzerland, Germany and Italy. Randy Sandke, a composer, has been awarded two grants by the National Endowment for the Arts and had his pieces performed at Carnegie Hall and the 92nd St. YMHA in New York City and the Avery Fischer Hall at Lincoln Center. Six of his suites have been performed by the Carnegie Hall Jazz Band. The Concord Concerto label released an Album featuring many of Mr. Sandkes’ orchestral compositions, with performances by the Bulgarian National Orchestra. More than fifty pieces by Mr. Sandkes have been recorded. His Subway Ballet was presented in July 2003 at the New York City’s 92nd Street Y. He has composed arrangements for Elton John, Sting, and the King of Thailand. He also wrote transcriptions for Wynton Maralis and Lincoln Center Jazz Orchestra. In 2002, Hal Leonard, Inc. published Randy Sandkes’ book Harmony for a New Millennium. It describes a method for exploring non-tonal harmony within the context of both compositional and improvisational music. The book has been endorsed by Jon Faddis and Joshua Redman as well as Maria Schneider, Dick Hyman and Nicholas Payton. Randy has also contributed scholarly articles to the Oxford Companion to Jazz as well as the Rutgers University Annual Review of Jazz Studies. He has also been a guest lecturer at Hofstra University’s Julliard School and Manhattan School of Music. He is listed in most jazz CD reference guides and the Encyclopedia of Jazz. In the October 2002 Jazz Times issue, a feature article was published about him. The English magazine Jazz Journal also featured Randy in a cover story that ran in two parts in 1996. His recent CD, Inside Out, was named one of the top ten albums of the year by Jazz Times in 2002. from http://www.randysandke.com