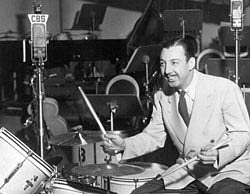 Ray Bauduc was a pioneer in traditional jazz circles. His precise and disciplined patterns, as well as his syncopated fills, helped New Orleans drummers transition from the strict, repetitive progressions of the past era to swing. Jules Jr., Jules Bauduc’s brother, was the son of Jules Bauduc (a great cornetist). His sister, Jules Jr., was also a musician and pianist. Bauduc started his professional career with a band that was responsible for accompanying films. While still in school, Bauduc worked later with Emmett Hardy, the cornetist, and also the Six Nola Jazzers. Bauduc toured with Johnny Bayersdorffer in 1924, and then worked with Scranton Sirens. This group included Billy Lustig (1925), Joe Venuti (1926), and Eddie Lang (1926). Fred Rich, a vaudevillian group that played drums and tap, led Bauduc for two years. He also played with Miff Mole in 1927. He was a major star in the 1930s. Bauduc was with Ben Pollack’s orchestra for six years (1928-1934). He also had sessions with Red Nichols and Jack Teagarden. Bauduc joined Bob Crosby’s orchestra in 1935, one year after he had left Pollack. He remained there until 1942. “South Rampart Street Parade,” his composition, was a staple of the orchestra. He also co-wrote “The Big Noise From Winnetka,” with Bob Haggart. While he was in the Army in the 1940s, he briefly led a band with Gil Rodin and then ran his own groups. Later in the ’40s there were recordings with Manone, Crosby and Teagarden (1951-1955). Bauduc and Nappy Lamarre led a Rampart group from 1956-1959. He also worked as a freelance musician on the West Coast in 1960s. Finally, he moved to Bellaire, TX where he performed occasionally. Allmusic