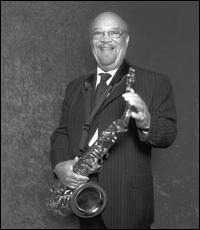 An exuberant player with attractive tones on both tenor and alto, Red Holloway was also a humorous blues singer. Whether it be bop, blues, or R&B, Holloway held his own with anyone. Holloway played in Chicago with Gene Wright’s big band (1943-1946), served in the Army, and then played with Roosevelt Sykes (1948) and Nat Towles (1949-1950), before leading his own quartet (1952-1961) during an era when he also recorded with many blues and R&B acts. Holloway rose to fame in 1963 while touring with Jack McDuff, making his first dates as a leader for Prestige (1963-1965). Although he cut many records in R&B settings, Red Holloway was a strong bop soloist at heart, as he proved in the ’70s when he battled Sonny Stitt to a tie on their recorded collaboration. He went on to work mostly as a leader, but also guested with Juggernaut and the Cheathams, and played with Clark Terry on an occasional basis. He continued being active as a player into the 21st century, releasing Standing Room Only on Chiaroscuro Records in 2000; Keep That Groove Going, with Plas Johnson, on Milestone Records in 2001; Coast to Coast, also on Milestone Records, in 2003; and Go Red Go! in 2009 on Delmark Records. Holloway died on February 25, 2012 of kidney failure and stroke. He was 84 years old. from allmusic