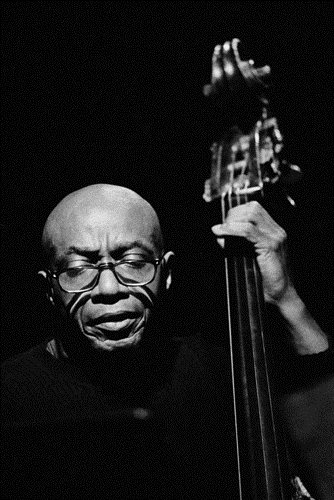 Reginald “Reggie” Workman, born June 26, 1937 in Philadelphia (Pa.), is an American avant-garde jazz double bassist and hard bop double bassesist. He was a member in jazz groups that included Roy Haynes, Gigi Gryce and Red Garland. Workman was replaced by Steve Davis in the John Coltrane Quintet in 1961. Workman was present at the legendary Live at the Village Vanguard session of the saxophonist. He also performed with Art Davis, a second bassist, on the 1961 album Ole Coltrane. Workman was forced to leave Coltrane’s band after a European tour. Workman was also a member of James Moody’s Jazz Messengers and Yusef Lateef. He was also a part of Herbie Mann, Thelonious Monk, and Art Blakey’s Jazz Messengers. Archie Shepp, Lee Morgan and others have recorded with him. He is currently a professor at The New School for Jazz and Contemporary Music, New York City. Text contributed by users is available under Creative Commons By–SA License. It may also be available under GNU FDL.