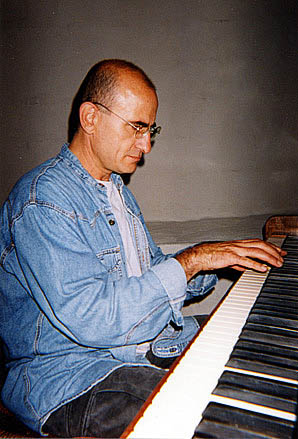 Rene Bottlang (* 1. Rene Bottlang (* 1.) was born May 1953 in St. Gallen and is a Swiss jazz composer and pianist. Bottlang studied at the Swiss Jazz School Bern and the conservatory of Lausanne. In the mid-1970s, he toured Europe with his Orchestre a Musiques, performing at many jazz festivals including Paris, Moers, and Zurich. He also toured with Madame Schwab. He moved to Paris in 1977 and began his career as a pianist and composer for musicians from the French jazz scene. He has lived in southern France since 1978. He has been a soloist since 1980 (1980-2002, three solo albums), and also performed in a duo or with Francois Jeanneau and Michel Gaudry. He was part of a trio that included Andre Jaume, Bruno Chevillon and Bruno Chevillon at the Jazz Festival in Zurich 1983. He played in Lausanne, Switzerland with Mal Waldron in 1987. He worked with Christian Lete and Barre Phillips over the next few years. He was one of the founding members of the quartet TBMT in 1991. He was accompanied by piano, drums and a double line-up. He recorded Hommage a Boby Lapointe in 1994 with his quintet and Phil Minton. He moved to Vienna temporarily in 1995. This allowed him to perform with Franz Koglmann, and has seen an increase in Eastern Europe. He composed commissioned works for festivals and the media, as well as solo and duo concertos for Berliner Konzerthaus am Gendarmenmarkt. Text contributed by users is available under Creative Commons BySA License. Additional terms may apply.