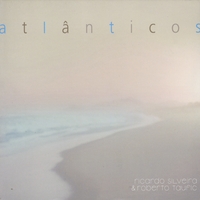 Atlanticos is the first collaboration between Ricardo Silveira, a Brazilian guitarist, and Roberto Tauffic (a Honduran guitarist). It is a collection acoustic guitarist duo’s that is sure to delight both long-time admirers of Ricardo’s back catalogue and fans of Brazilian jazz. We are delighted to present the work of two musicians we admire so much. It was spontaneously recorded in Rio over two days in 2012. Multi-Grammy-nominated Silveira is an Adventure Music artist who has been playing for more than ten years. He is one of Brazil’s most sought after sidemen and one of the best session players in Brazil. Silveira, a guitarist from Brazil, has been a global star for his unique blend of Brazilian music and contemporary American jazz. Silveira is a sought-after studio musician and musical director who has worked with many masters. He is also a renowned composer and solo artist. His eleven albums are a collection of sounds from both the countries he loves. He says, “I liked different styles and seemed like I could find connections between them.” “It’s all about music.” He has recorded and played with many musicians throughout his career, including Milton Nascimento and Gail Costa. Taufic was born in Honduras to a Palestinian mother in 1966. He moved to Brazil at the age of five. He began his musical studies after five years. At 15 he played classical guitar and cavaquinho in various festivals, along with many bands performing Brazilian music and Choro. Roberto began his career at 17 as a session man, working on many productions in some of the most prestigious recording studios in his native state (Rio Grande do Norte-Brasil). CDBaby