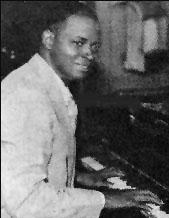 Richard M. Jones, composer of “Trouble in Mind”, was most famous for his leadership of a series of interesting recording dates. As an alto horn player and cornet in the Eureka Brass Band, Jones also worked in New Orleans as a pianist from 1908-1917. After his playing with Oscar Celestin (1918), Jones relocated to Chicago, where he worked at Clarence Williams’ publishing house. He recorded as a pianist soloist in 1923. He also accompanied Blanche Calloway (1925-1926) and Chippie Hill (1926-1926). Jones led his Jazz Wizards during his own sessions between 1925-1929. Jones had a few sidemen, including Johnny St. Cyr and Ikey Robinson, Roy Palmer, Omer SIMEON, and other lesser-known musicians. Richard M. Jones lived in Chicago the rest of his adult life. He led sessions in 1935-1936, 1944 and worked as a talent scout at Mercury in the 1940s. Two Classic CDs have been released two of his recordings as a leader. Allmusic