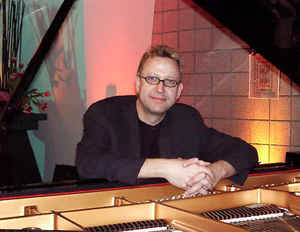 Rob Mullins’ musical reputation has been built in Hollywood by a steady string of releases in contemporary jazz over the last 30 years. His “Soulscape” album earned him a Grammy Nomination. This project was the first step in his rise to international fame as a performer and composer. Rob has since recorded 33 CDs with his music, three of them reaching the Billboard Top Ten. His most recent releases are “Only in Venice”, “Over the Rainbow”, and “Wistful Thinking”, which were released on iTunes and Amazon in March 2017. Rob started out playing drums at the age of 11. He was already a professional drummer with a California Big Band when he was 12. In 6th grade, he did his homework on a bus and became a touring professional. At 14 he was involved in a car accident and was a pedestrian. This forced him to switch to piano. Rob learned to play the guitar, bass, percussion and saxophone during this period. Rob started composing and arranging at the age of 16. He also formed his first band. Rob attended the University of Northern Colorado as a percussion scholar and then went on to study composition at George Russell in New York with a National Endowment for the Arts grant. His “Soulscape” album brought Rob back to California, where he is a sought-after composer, arranger and producer. Rob’s list of credits as a live performer is a complete listing of Hollywood’s jazz, rock, and pop performers. Brandy, Hoyt, Axton, Dianne, Dianne Schuur and The Crusaders have all been his performances. The Blue Note Clubs all over the globe, Planethollywood locations worldwide, Brad Pitt/Jennifer Anniston Wedding are just a few of the venues Rob has performed at. Rob is a composer and has written over 400 songs, including top ten radio hits, for Eric Marienthal (Ronnie Laws) and Wilton Felder. He was nominated for a Grammy for Jazz Composition and his production of “Tell It Like It is” for Bobby Caldwell reached #17 on the Pop Charts. Rob is a studio keyboardist, midi programmer and can be heard each week on “The Proud Family”, “Soulfood”, “Moesha”, “King of Queens,” (CBS), Sister Sister”, “Cousin Skeeter”, (Nickelodeon) and “The Parkers” (UPN). You can hear music from his extensive catalog of songs on General Hospital, CBS News This Morning and NFL Sports Extra! The Entertainment Magazine, E! True Hollywood Story and Talk Soup. Rob hosted the annual Jazz Concert for Boys and Girls Clubs of America, for which he was awarded a Congressional Award for Public Service. Rob was a radio personality who appeared on Japanese radio stations for FM Tokyo and the Hollywood Reporter for two years. Rob is an educator and runs a successful privatelessons program that teaches music business skills to students. He has also successfully taken his curriculum overseas to Russia and Europe. Rob Mullins Publishing and Hal Leonard Publishing offer his books and compositions to students. As an industry presence, Rob is a voting member of the National Academy Of the Recording Arts and Sciences (Grammy Awards) from www.planetmullins.com