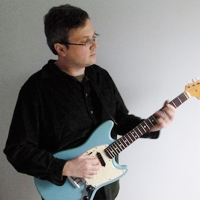 Rob Price hails from Massachusetts. His family has encouraged him to learn and play music all his life. After moving to New York City in 1990, he became a classically trained violinist. He also played viola and piano. He was an original member of Dim Sum Clip Job, an avant-rock band that recorded an album for John Zorn’s Avant label. He has also played in many experimental and improvised music groups. Price recently released recordings of his music, both composed or improvised on his Gutbrain Records label. He has also performed at the What Is Jazz? He has performed at the What Is Jazz Festival and the Boise Experimental Music Festival, and plays regularly in New York City. from www.bostonguitarfest.org