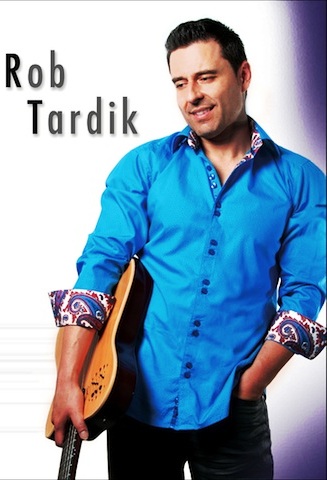 Rob Tardik is an award-winning guitarist who has been playing for nearly 20 years. He has also become a rising musician in instrumental music. At the Canadian Smooth Jazz Awards, which are held every year in Mississauga’s Living Arts Center, Tardik has performed five consecutive years. Rob has performed on the same stage as legendary producer Phil Ramone and Tower of Power founder Greg Adams. He is also a two-time Grammy winner Paul Brown and Liberty Silver. Peter White is a guitarist and David Sanborn is a 4-time Grammy winning saxophonist. Rob has opened for Jose Feliciano, the legendary guitarist and singer. Rob is back on the stage again with his brand new CD, Balance, Energy. Laughter. Love (B.E.L.L.). This CD features many new collaborations with Grammy-winning artists like Paul Brown and contemporary jazz stars such as Jaared, Warren Hill, Darren Rahn and Gabriel Mark Hasselbach. Two new tracks Rob co-wrote with Emmy winner musician Don Breithaupt are featured on this CD. Rob was named the 2010 Canadian Smooth Jazz Guitarists of the Year and held the #1 spot in the U.S. Music Choice Contemporary Jazz charts for four weeks in September/October 2010. Rob is a master of combining his guitar skills with a keen melodic sense to produce his trademark liquid smooth sound. Rob was born in Toronto and began playing guitar at age 7. Rob was born in Toronto and began playing the guitar at age 7. He received a scholarship to high school music, and then he went on to study music at York University. Rob holds diplomas from Humber College in Recording Engineering as well as in Media Arts. Paradise Alley, his musical act, was awarded a recording contract by MCA/Duke Street Records in 1991. Rob was also named Mississauga’s 2007 “Established Artist of the Year” in recognition for his musical contributions. This award was previously won by Rik Emmett and Oscar Peterson. Rob worked as a Roland Canada guitar product specialist/clinician, and was a faculty member of the prestigious Merriam School of Music Oakville for more than 15 years. Rob also teaches at Guitar Workshop Plus and serves as an adjudicator for Midland Y’s Music Festival. Rob has performed at many prestigious venues, including the Catalina Island Jazz Festival in 2011, the 2010 American Smooth Jazz Awards in Chicago, Queen Elizabeth Theatre, Mississauga’s Living Arts Center and Celebration Square Amphithetre, Roy Thompson Hall and the Buffalo Center for the Performing Arts Spaghettinis and Anthology in California, and the 2009/2010/2011 Toronto International Film Festival and the Oakville Jazz Festival. Rob hosted the first “Out of the Cold”, Contemporary Jazz Charity Concert at Carmen’s Dinner Theatre to over 300 people in February 2011. With the support of Grammy award winners Liberty Silver and Paul Brown, and other talented local musicians, all net proceeds went to the Canadian Hero Fund families of fallen Canadian soldiers. Fans of Contemporary Jazz and positive, energetic music should not miss this annual event. Rob is a respected guitarist and industry veteran. His debut CD, “Without Words”, and his second album, “The Right Time”, are both highly acclaimed. Rob’s soulful rendition of Sting’s “Fields of Gold” earned him a #1 Smooth Jazz single in Canada in spring 2006. His albums have been received with enthusiasm from radio stations across the globe, including the U.S. and Canada. Many of their hits include “Crusin”, “Smoothy”, and “Frame of Mind”. His latest CD, B.E.L.L., featured his first single. His first single from his latest CD B.E.L.L. charted on Billboard U.S. for 20 weeks, with radio play around the world. While “East meets Wes”, his second single “Shakin the House” debuted at #1 on all the major music charts and continues to chart on Billboard U.S! B.E.L.L. B.E.L.L. has been named the #1 Canadian Smooth Jazz Artist in 2011 by Cafe Jazz Radio and “Smooth Jazz News” magazine. Its #1 CD in 2011 and “East meets Wes”, the #1 single, also made the list. It’s a triple honor! Rob’s third CD Balance, Energy. Laughter. Love (B.EL.L.). Featuring diverse musical influences like Larry Carlton and Paco De Lucia. Lee Ritenour. Antonio Carlos Jobim. Sting to Eddie Van Halen. combines these influences and is a culmination of his many musical inspirations that have shaped his musical voice on the guitar. from http://www.robtardik.com