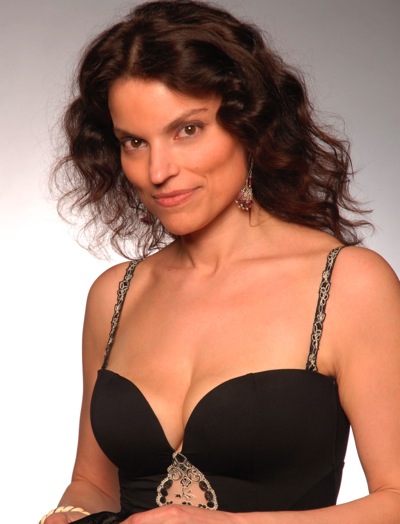 Roberta Gambarini was raised in Torino (Italy) into a jazz-loving family. As a child, she began to listen to jazz music and took clarinet lessons at the age of twelve. She began performing and singing in jazz clubs throughout Northern Italy at age 17. At the age of 17, she moved to Milan to pursue a career with a jazz singer. Roberta was awarded third place in a national radio jazz radio contest. This led to opportunities to perform at various jazz festivals across Italy. In 1986, she began recording under her own name as well as with guests. She appeared on Jazz broadcasts on Italian TV and radio channels. She toured Italy with Emmanuel Bex (French Hammond organ player) in 1997. With a scholarship from Boston’s New England Conservatory, she immigrated to the United States in 1998. Roberta won third place in Thelonious Monk International Jazz Vocal Competition two weeks later. She is a dynamic performer who has virtuosic vocal chops and draws enthusiastic support from her fans wherever she performs. Before her North American debut, Easy to Love, (Groovin’ High/Kindred Rhythm), she had only spoken by word. Roberta showcased her musical approach, warm timbre, flawless timing and intonation as well as incredible technique and scatting skills. The album included 12 jazz standards and classic songs from The Great American Songbook. Two bonus tracks were also included and James Moody was featured on a thrilling scat duel. Easy to Love was nominated in the Best Jazz Vocal Album category for a GRAMMY(r), in 2007. This album was also included in the 2007 Grammy nominations by Nancy King, Karrin Allyson and Nancy Wilson. Roberta’s “formidable talents” (DownBeat Magazine), have earned her wins as the 2007 Jazz Journalists Association Female Jazz Singers of the Year and the 2007 Talent Deserving Wider Recognition from DownBeat Magazine’s Annual Critics Poll. Roberta’s major label debut was made with You Are There (Groovin’ High/Emarcy), a collection 14 hauntingly beautiful melodies with Hank Jones, on February 12, 2008. Roberta and Hank recorded the music in just one day. They had no idea of what to do with it, but they did choose 25 songs that they liked and thought would make a good record. Gambarini recalls that there were no isolation booths or headphones and no overdubs. “The sound would have been the same as if you were in someone’s living-room playing with friends.” This is Hank Jones. Roberta Gambarini, along with Ron Carter, Herbie Hancock and Slide Hampton, has performed with Hank Jones, Christian McBride and Jimmy Heath. She has also performed at Walt Disney Concert Hall, Kennedy Center and Lincoln Center, Town Hall, Walt Disney Concert Hall, Walt Disney Concert Hall, Town Hall, Walt Disney Concert Hall, Walt Disney Concert Hall, Walt Disney Concert Hall, Walt Disney Concert Hall, Town Hall, Walt Disney Concert Hall, Walt Disney Concert Hall, Carnegie Hall, Kennedy Center, Lincoln Center, Town Hall, Slide Hampton, Hancock, Hancock, Slide Hampton, Hancock, Hancock, Slide, Hancock, Hancock, Slide, Hancock, Hancock, Hancock, Hank Jones, Christian McBridey, North Sea, Toronto, Barbados, Barbados, Monterey, North Sea and North Sea, North Sea, Toronto and Umbria Roberta was recently named Rising Star Female Vocalist-of-the Year by the 2008 DownBeat Critics Poll. Roberta will be touring internationally with her band to support her new album, So in Love. It is due for release in the summer 2009. bio by www.myspace.com/robertagambarini