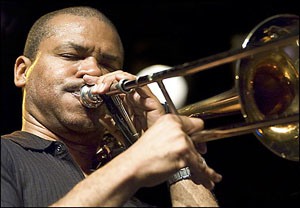 Robin Eubanks is the most prominent jazz trombonist of his generation. Robin Eubanks is a powerful and long-lasting artist, whether he performs with his groups, EB3 and Mental Images, or with Dave Holland Quintet, with whom he was an origin member. Robin has released seven albums of original music as a leader. Robin is the son of a musical family. His brother Kevin Eubanks is The Tonight Show’s music director and his brother Duane plays trumpet in New York. Their mother is a well-known jazz pianist and music educator. Robin started studying music when he was eight years old. He continued his studies through college and graduated cum laud from the University of the Arts, Philadelphia. He studied trombone as well as theory, harmony, composition and arrangement while he was a student. After graduating, the young trombonist made his way to New York City, where he started a career that would lead to many collaborations with artists such as Elvin Jones, Sun Ra and Barbra Streisand. His performances on Michael Brecker’s Wide Angles and Dave Holland’s What Goes Around have won him Grammys. Robin splits his performing time with an appointment at The Oberlin College Conservatory, where he is a tenured Professor Jazz Trombone. He was awarded a Chamber Music America composition grant in 2002. In 2003, he received an ASCAP Composer’s Grant. He is now commissioned by other musical groups as a composer. His compositional interests, like his performing career are astonishingly varied. The eclectic composer is musically fluent but stylistically multilingual. How is he able to do this? It appears that he has a perfect command of his craft and an innate gift that can make it sound like math and magic. He explains it as follows: “My compositions can easily change from Swing to Funk, Latin to 11/8 or 7, without sounding forced or awkward. I can draw on all my experience. “I have the freedom of creating forms that combine diverse influences into new structures which are organic.” His compositions can also be heard on numerous Dave Holland Quintet recordings and Big Band recordings. His arrangements have also been recorded by the Mingus Big Band. Many colleges and universities in the United States have performed Robin’s original music and have arranged his music to fit their ensembles. Another notable commissions include Cause and Effect which was premiered in the United States with the Bakersfield Symphony Orchestra, 2003; string and horn arrangements to Freddie Cole’s album, This Is Always; Cross Currents to JJ Johnson’s Grammy-nominated recording, The Brass Orchestra; and a arrangement of Genesis for McCoy Tyner’s Big Band. As if all that wasn’t enough, Robin has grown to be an internationally renowned musician, composer, and performer over the years. from http://www.robineubanks.com