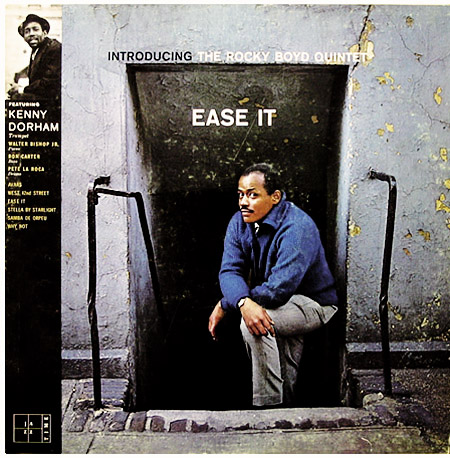 John Erskine Boyd, also known as “Rocky”, is an American jazz saxophonist. He was born in Boston, 1936. He attended the South End Music School and Berklee, as well as the Boston Conservatory. He was interested in jazz and moved to New York in 1958 to continue his studies. While playing in jazz clubs, he also studied at the South End Music School. He met his first girlfriend at the Five Spot. He was soon working with Johnny Griffin and Philly Joe Jones, as well as Pete LaRoca. He later replaced Stanley Turrentine as the Max Roach Quintet’s leader and took Hank Mobley’s place in Miles Davis Quintet for three more months after he had left in 1961. Boyd did not record in studio with Davis and he left for the road in 1962 with the Philly Joe Jones Quartet. We know almost nothing about Boyd’s subsequent activities. Ease It is his only known studio album, which was recorded in 1961 by Jazztime Records. Boyd was a well-known performer back in 1958. He lived in New York City with Sunny Murray, the drummer. Sunny recalls that Boyd “sort of started my career…he was very hot at that time.” He brought Sam Rivers and Tony Williams into music […].. He was a great help to me as I started my studies. We were also living together in downtown. Wikipedia