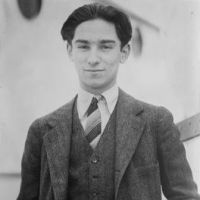 Roger Wolfe Kahn was an American jazz musician, composer, and bandleader (Roger Wolfe Kahn u0026 His Orchestra). He lived from October 19, 1907 to July 12, 1962. Roger Wolff Kahn was born into a wealthy German Jewish bank family in Morristown, New Jersey. His parents were Adelaide “Addie”, (Wolff), and Otto Hermann Kahn. They were a prominent banker and arts patron. Abraham Wolff was his maternal grandfather. Otto Kahn and Roger Kahn were the father and son who first appeared on Time’s cover separately: Otto in November 1925, and Roger in September 1927. Kahn, who was only 16 years old, is believed to have learned 18 instruments before he started his own orchestra in 1923. Kahn was featured in a 1925 short film that Lee De Forest made using the Phonofilm sound on film process. Famous jazz musicians were hired by Kahn to perform in his band during recording sessions. Victor 1925-1929; Brunswick 1929-1930; Columbia in 1932. Kahn enjoyed conducting and leading his orchestra. According to some reports, Kahn used to jump on the ground when his band was performing well and wave his legs in air. In the middle of 1930s, however, he became bored with his orchestra and decided to disband it. He instead became interested in aviation and, in 1941, became an instructor pilot at the Grumman Aircraft Engineering Corporation. This was a well-known manufacturer of aircraft. Kahn was also able to manage the technical service and sales department of Grumman aircraft. Grumman created a special sales plane, the G-58B (a modified F8F Bearcat Fighter aircraft), which he used to tour numerous military bases throughout North America during his time with the company. Kahn married Hannah Williams, a musical comedian, in New York on January 16, 1931. His family owned Oheka Castle on Long Island. The ceremony was secretive for two weeks until Sweet and Low, the Broadway musical Williams was to appear in, was finished. Two years later, the couple was again in the news when they split and Williams married Jack Dempsey, a boxing champion. On April 7, 1933, Roger Wolfe Kahn, a Maine politician’s son, married Edith May Nelson. This marriage lasted until Kahn died in New York City from a heart attack on July 12, 1962. He had two children with his second wife, Virginia Kahn and Peter W. Kahn. Kahn’s most popular titles are: “Hot Hot Hottentot”, “One Night In The Jungle”, “Anything You Say”, “Crazy Rhythm”, (later used by Woody Allen’s 1994 film Bullets Over Broadway), “Imagination”, “She’s a Great Great Girl”, (the closing theme tune of WAMU’s Hot Jazz Saturday Night hosted Rob Bamberger). Kahn’s Broadway work includes: Here’s Howe (1928), – musical – composer from Wikipedia