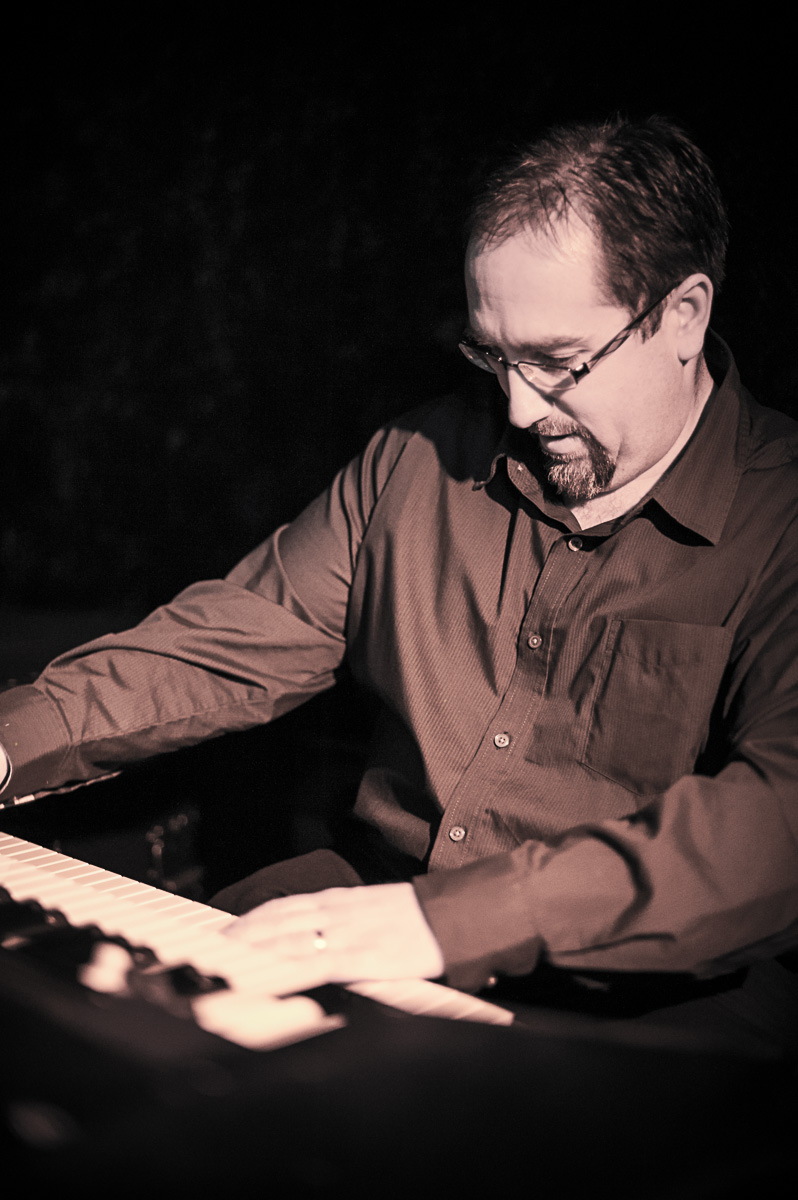 Ron Oswanski, one of the most gifted Hammond B3 players in a jazz scene that is awash with organ talent, is just beginning to establish himself as an individual. Oswanski is also an excellent accordion player. His contemporary sound is light, rhythmic, and rooted in the B3’s roots, but informed by post-bop developments. Oswanski’s finely tuned sense of dynamics and vast harmonic palette allow him to burn with the best, but then slow down to create a beautifully crafted song. His debut CD, December’s Moon, is a stunning album that showcases his multifaceted sensibility. It features heavyweights like John Abercrombie as guitarist, John Patitucci as bassist, Clarence Penn as drummer, and Tim Ries, the saxophonist, who also produced it. The CD will be available on Palmetto Records March 19, 2013. Oswanski states that he is not a Jimmy Smith-style organ player. Although I do play this style, I am a huge fan of ECM and have listened to a lot Jan Garbarek and Keith Jarrett. I enjoy open harmonies and being able stretch harmonies where necessary. “In my music subtlety, beautiful melodies and aggressiveness are equally important.” December’s Moon is a great example of Oswanski’s musical range. It features Kenny Wheeler and Led Zeppelin. Abercrombie, who expanded the textural possibilities for B-3 ensembles through his own ECM Organ Trio sessions, sets the tone for about half of the tracks. He applies his liquid tone to Oswanski’s original tunes. The album’s second half is defined by the energetic rhythm section connection between Penn (on both electric- and acoustic basses) and Patitucci, including a seductive postbop polka which harkens back to Oswanski. Ries is equally adept on tenor and soprano sax and contributes memorablely to the first ten tracks. Only the captivating trio version Kenny Wheeler’s “Kayak” with Abercrombie, drummer Ian Froman and Fred Hersch’s loving evocation Bill Evans’ “Evanessence” by Patitucci and Penn are left. Oswanski has enjoyed a close friendship with many great musicians for over two decades. Oswanski was a teenage recruit by Maynard Ferguson’s Big Bop Nouveau Band in the 1990s. He has performed with many of jazz’s most prominent musicians, including the Maria Schneider Orchestra, Tim Ries and The Rolling Stones Project, Jack Wilkins and Mike Clark, Milt Hinton, Myron Wilden’s Countryfied, Dave Berger and The Sultans of Swing, along with other music icons such as Aretha Franklin, The Temptations, Blood, Sweat and The driving force behind the Grammy Award winning Caribbean Jazz Project was Dave Samuels, a vibraphone master. He created the Organik Vibe Trio to collaborate with Oswanski. This led to the thrilling 2010 session Moscow. He is also a frequent performer with the trio of Israeli guitarist Oz Noy and drummer Nate Smith. They also play with John Hollenbeck’s Dan Willis Band, Sheryl Bailey’s Trio, Carl Fischer’s (Billy Joel’s) Groove Project, and guitarist Sheryl Bailey. Oswanski was born in Toledo, March 17, 1974. He began piano lessons with Mark Kieswetter as a child. Oswanski is an Ohio jazz legend who has played with Zoot Sims and Jack Sheldon as well as James Moody. He also served three years as the musical director for Jon Hendricks. Oswanski also became familiar with the accordion while performing with his father’s polka group. As a young high school pianist, Oswanski gained invaluable experience from many Cincinnati tri-state jazz legends, including Jimmy Cook and Paul Keller, Ernie Krivda, Ernie Krivda, Brad Sharp, and Ernie Krivda. He was an electric bassist and gigged with Toledo jazz pianist Eddie Abrams. Oswanski was drawn to the B-3 by his love for bass lines. Bill Heid introduced him to it, an experienced organist who has a cult following among B-3 enthusiasts. Oswanski recalls hearing Bill play at Rusty’s every day, referring to a Toledo music spot. Oswanski said, “I bought my first organ form him, and he was the main organ influence on me.” Oswanski won numerous awards from DownBeat magazine, the International Association of Jazz Educators and a variety of festivals. He also received a scholarship to Manhattan School of Music where he studied piano with Garry Dial and Harold Danko. He received a call from Maynard Ferguson within months of his 1992 move to New York City. This was on the recommendation of Tim Ries who had been a close friend of the older saxophonist and took Oswanski under his wing. Between international tours, he spent five years playing keyboards, piano, and B-3 with Ferguson. Oswanski was also featured on two Concord Jazz albums: 1995’s These Cats Can Swing, and 1998’s Brass Attitude. Ferguson revisits one Oswanski original, “Milk of the Moon”, which Ferguson praises for its “subtlety and colors, as well as beauty,” hinting at Gil Evans’s writing. Oswanski said that working with Maynard was a wonderful experience. He encouraged us to write. It was important to be able musically to explore and to use what you already had. If it makes its way into the set it’d be possible to record it.” Oswanski had already left Ferguson and was now focusing on the B-3. There were very few organ players who could extend the instrument’s post Larry Young vocabulary at the time. He is a highly sought-after accordionist, endorsed by Victoria Accordion Company. He works in a variety of musical settings. Oswanski is making a late start as a leader because of his busy schedule as a sideman and session player. He’s also been running Applied Microphone Technology for drummer Martin Paglione for over a decade, a company that makes mics specifically for his instruments. AMT was his inspiration to design an accordion mic system. The jazz world now has the opportunity to hear Oswanski’s sound. from http://www.ronoswanski.com