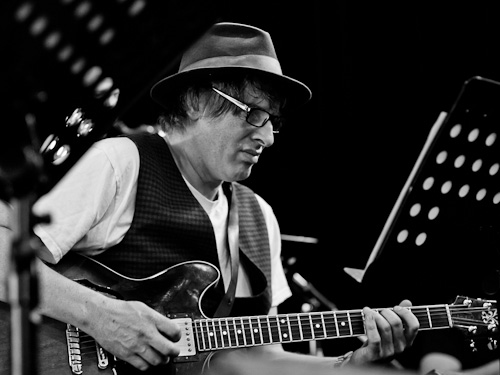 Ron Samworth, Vancouver’s guitarist, composer, improviser and bandleader, is likely well-known to all who have attended major Canadian jazz festivals or creative music festivals since the mid-’90s. Other Vancouver musicians like Francois Houle, clarinetist, and Paul Plimley, are likely to have a higher profile, especially outside of Canada. Perhaps if one of his main creative outlets was named the Ron Samworth Quartet, the guitarist would have been more well-known. But Samworth prefers the role of collaborator in his own ensembles and has never wanted to be the center of attention. His impact on Vancouver’s scene is not to be underrated. Samworth studied with Muhal Richard Abrams and Dave Holland at the Banff Center for the Arts in Canada Rockies. He quickly established himself as a performer and organizer in Vancouver’s jazz clubs and performance venues. From 1987 to 1994, Samworth co-curated a weekly concert series at Vancouver’s grunt gallery. He was a frequent player at Vancouver’s Classical Joint. Samworth was also involved in the organization of the Glass Slipper, a well-known jazz and creative music venue, which, after having moved locations, was set on fire by an arsonist. Three discs featuring Samworth in 1990 and 1991 are recorded on Vinny’s Nine Winds label. He is also a member of the Lunar Adventures Quartet and the New Orchestra Workshop (NOW), a larger musician’s collective, for which he served as the artistic director. Several NOW Orchestra CDs featuring Samworth have been released from the mid-to late ’90s. These include collaborations with Barry Guy, a British free jazz bassist, and Rene Lussier (an avant improvising guitarist from Montreal). Samworth’s most notable work was with the Talking Pictures quartet, which includes Samworth and Bill Clark as well as Dylan van der Schyff, drummer, and cellist. The two CDs, Ciao Bella (1995), and The Mirror with a Memory (1997), were released on Red Toucan. They feature music mainly written or improvised by Samworth, with occasional pieces from other members of the band and interpretations by Robin Holcomb and Ornette Coleman. There are strong similarities between Talking Pictures’ music and the avant-garde New York scene. The tight, unison passages are interspersed by improvisations that emphasize textural exploration, group interplay, and even the instrumentation (sans the bass), recalling groups such as Dave Douglas’ Tiny Bell Trio or Myra Melford’s the Same River Twice. Because Vancouver and Seattle are two of the most populated cities in the world, creative musicians often find themselves influenced by the same inspiration. Many young Seattle improvisers, such as Brad Shepik (who Samworth met at Banff), headed East to join a core group New Yorkers. In 2000, Talking Pictures released Humming on Vancouver Songlines. This CD was a joint release by the quartet and Jorrit Dijkstra (Dutch saxophonist), who were credited with all of the CD’s compositions. As the new millennium dawned, Samworth was increasingly heard as a sideman on recordings. He appeared on albums by Francois Houle and George Lewis in the late ’90s. He was still involved with Talking Pictures, but he became the Barking Sphinx Performance Society’s artistic director. This society produces multi-disciplinary theater, dance, spoken word and film projects, with Talking Pictures as its core musical ensemble. His involvement in Vancouver’s Ruby Slippers Theatre and Experimental Dance and Music (EDAM) also shows Samworth’s interest. The Barking Sphinx Performance Society was instrumental in launching a musical venture for Samworth. It was called the Barking Sphinx Ensemble. This ensemble featured Samworth, van der Schyff and Masa Anzai who are part of Vancouver’s new generation improvising musicians. Allmusic