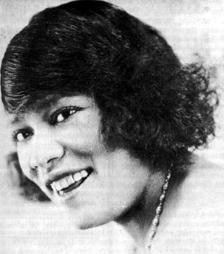 Rosa Henderson, born November 24, 1896 and died April 6, 1968. She was an American jazz singer and vaudeville performer. Rosa Deschamps was born in Henderson County, Kentucky. She is remembered as one the greatest blues performers of the 1920s and 1930s. In 1913, she began her career as an entertainer when she joined her uncle’s circus troupe. In 1918, she married Douglas Henderson and began traveling with the Mason-Henderson show. After moving to New York in the 1920s, her career as a comedian began. She performed on Broadway and later in London. In 1923, her nine-year recording career began. She recorded over 100 songs during that period using a variety of pseudonyms, including Sally Ritz and Flora Dale, Sarah Johnson and Gladys White. Fletcher Henderson’s Jazz Five, Fletcher Henderson’s Orchestra, Fletcher Henderson’s Club Alabam Orchestra and the Choo Choo Jazzers accompanied her. Fletcher Henderson recorded “Do That Thing” on May 28, 1924. It was probably the first recording of a woman singing with a large band. Even though her recordings began to decline after 1926, she performed until 1932, when she was hired by a New York department shop. She performed benefit concerts until the 1960s. Henderson died in Roosevelt Island, New York. She is not related to Fletcher Henderson, Horace Henderson or Edmonia. Wikipedia