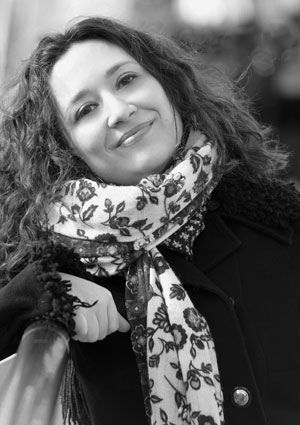 Rosanna was born in South Italy and began singing lessons in Bari with Mariella carbonara. She also attended the school “Il Pentagramma”. She then completed a Diploma in Jazz singing in 2005 at Accademia Internazionale della Musica in Milan, studying with renowned jazz singer Tiziana Ghiglioni. She was awarded numerous scholarships during these years as Best Vocalist. In 2001, she was a finalist in Premio Nazionale Massimo Urbani. She also performed in International Festivals like “Time in Jazz”, “Foggia Jazz”, and “Nuoro Jazz”. She collaborated with many musicians, including Enrico Intra and Gianni Bedori, Rossano Sportiello and Fabrizio Bolsso and Massimo Manzi. Ostinato was her electro-acustic collaborator at Worldbeat (2003). She recorded the song “Gospel Music Makes Me fly” (2004 with Civici Cori di Jazz). She started teaching vocals in “Accademia di Musica H. Villa Lobos” in Paderno Dugnano and she gained experience in big band touring with the Monday Orchestra, with whom she recorded “Monday Orchestra”(Ultrasound 2010). Giorgio Gaslini was a mentor to her and asked her to sing on both Gaslini Legend (SplascH) and Gaslini Song Book(Velut Luna (2006). She was featured in “Ritornare a sud”, which saw her touring Italy with Mario Rosini’s trio and collaborating with actors Silvia De Santis (Rene Mathis, Quantum of Solace and Casino Royale). Rosanna was invited by Danilo Rea, a pianist, to join his “Cinema Songs” project. She had the chance to perform with him on several occasions as well as to collaborate with other musicians such Ellade Bandini (Massimo Moriconi), Marcello Sirignano and Marco Tamburini (songwriter Gino Paoli). She moved to London in 2007 to complete a Master’s in Pharmacy. There she also completed a Master’s in Music in Jazz Performance at Guildhall School of Music and Drama (2010). She also opened the Elton John concert in Trani that year with Danilo and her quartet. She was a performer at the Cork Jazz Festival, she sang with Eclectic Voices in London’s King’s Place, and she performed with the Barbican Mass Choir at Wynton Marsalis’ European Premiere at the Barbican Centre. Anita Wardell and Lynda Richardson were among her teachers. She isn’t limited to jazz music. In fact, she recorded “Mahler Symphony No2” with the Philarmonia Chorus and performed it at Royal Festival Hall, under Esa-Pekka–Salonen’s direction. She is a member of the London Vocal Project as well as Rhythms of the City. Rosanna is an international performing singer and vocal teacher who lives in London. from www.rosannabrandi.com