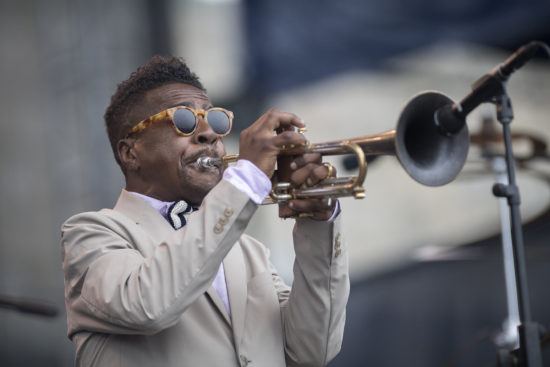 Roy Anthony Hargrove, October 16, 1969 – November 2, 2018, was an American jazz trumpeter. After winning two Grammy Awards in 1997 and 2002 for different types of music, Hargrove gained worldwide attention. Hargrove played primarily in hard bop for most of his albums. However, he also played many jazz standards, especially on his 1990’s albums. Hargrove was the bandleader for the progressive group The RH Factor. This mixed elements of jazz, funk and hip-hop with soul, gospel, and soul music. Chalmers “Spanky”, Alford, Pino Paladino, James Poyser and Jonathan Batiste were some of its members. Larry Clothier was his long-term manager. Hargrove was born in Waco Texas. Wynton Marsalis discovered Hargrove when he visited the Booker T. Washington High School for the Performing and Visual Arts, Dallas. He taught him trumpet lessons. David “Fathead”, a saxophonist, was one of his influences. He played in Ray Charles’s Band at Hargrove junior high school. Hargrove studied for one year at Boston’s Berklee College of Music in 1988-1989. He was more frequent at jam sessions in New York City. He went to New School in New York. Bobby Watson was his first recording. He recorded a Superblue recording shortly thereafter with Watson, Mulgrew Miller, Kenny Washington, and Mulgrew Miller. His first solo album, Diamond in the Rough was released on the Novus/RCA label in 1990. The Lincoln Center Jazz Orchestra commissioned him to write The Love Suite: in Mahogany, which was premiered in 1993. Roy Hargrove at Aalener 2008 Jazzfest. In 1994, Verve signed him to record With the Tenors of Our Time with Joe Henderson and Stanley Turrentine. He also recorded With the Tenors of Our Time with Johnny Griffin, Joshua Redman and Branford Marsalis. In 1995, he recorded Family. Then, he experimented with a trio arrangement on Parker’s Mood 1995 with pianist Stephen Scott and bassist Christian McBride. Hargrove won the Grammy Award in 1998 for Habana, the Afro-Cuban group he founded. His second Grammy was for Best Jazz Instrumental Album in 2002. He shared the award with Michael Brecker and Herbie Hancock. Hargrove’s jazz sound was characterized by a lot more groove and funk in 2000. He recorded Voodoo with D’Angelo (neo soul singer). Roz Nixon’s musical production, “Dedicated to Louis Armstrong”, featured Hargrove as a performer. He collaborated with Macy Gray and D’Angelo on two Red Hot tracks in 2002.