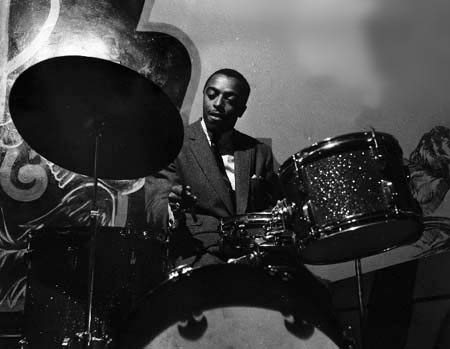 Roy Owen Haynes, a jazz drummer, was born March 13, 1925 in Boston. He began his professional career in the jazz world in 1945. He worked with Lester Young from 1947 to 1949, and was a member the Charlie Parker Quintet from 1949 to 1952. He recorded with Bud Powell, Wardell Grey, and Stan Getz. He toured with Sarah Vaughan from 1953 to 1958. Haynes is one the most well-recorded jazz drummers. He has performed in many styles over his 60-year career, from swing to avantgarde jazz. Haynes is considered one of the greatest jazz musicians. Haynes has a very expressive and personal style. “Snap Crackle” is a nickname Haynes was given in the 1950s. He is well-known for his deep engagement with his bandmates. He listens to and supports the entire band sonically and rhythmically. He can gracefully support Sarah Vaughan, as well as engage in explosive conversations with Eric Dolphy and John Coltrane. Inducted into the Down Beat Magazine Hall of Fame, he was inducted in 2004. Haynes has recorded and performed with John Coltrane (or Miles Davis), Gary Burton, Miles Davis. Dizzy Gillespie. Henry Grimes. Jackie McLean. Pat Metheny. Gerry Mulligan. Art Pepper. Horace Tapscott. His own groups have also been led by Haynes, with some of them performing under the name Hip Ensemble. His most recent recordings as an artist include The Roy Haynes Trio and Fountain of Youth. He continues to perform worldwide as of 2006. Graham, his son, is a cornetist, and Marcus Gilmore is a young jazz drummer. His nephew Christopher Haynes, a highly respected jazz drummer, will enter college this fall. User-contributed text may also be available under Creative Commons By–SA License.