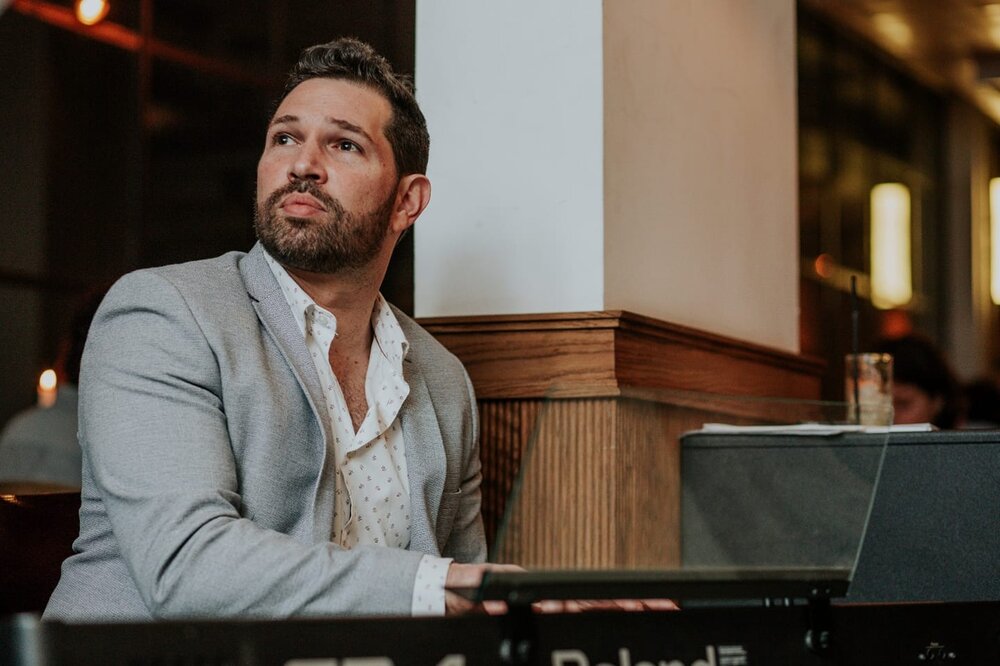 Roy Mor, originally from Israel, is an international pianist and composer. His music is described as “modern, daring, yet remains firmly grounded in jazz tradition, cutting seamlessly through many moods.” (La Repubblica). His playing was described as “melodic” as well as “energetic”, with his compositions being “a genuine quality that flows seamlessly out of his inner voice as an artist – strong and evocative.
Roy’s artistic path demonstrates his many interests and facets. After studying acting and serving as a paratrooper in the military, Roy earned a university degree with honors in Philosophy. He then moved to New York to pursue his true passion, music, leaving behind a career with Microsoft as a software engineer.

He was a sideman and gig leader at many of NYC’s top jazz venues like Rockwood Music Hall, Smalls Jazz club and Fat Cat. He also collaborated with some of New York City’s most acclaimed and up and coming artists such as Anat Cohen and Jazzmeia Horn, Yotam Silverstein, Jeremy Dutton, Linda Briceno, and Tyshawn Sorey.

Roy was a leader of his own quartet and trio, composed music for theatre productions and played the piano with The Israeli Big Band. He also performed at major Israeli festivals. Arnie Lawrence, a jazz saxophonist and teacher from Jerusalem, gave him the opportunity to study and perform with him at the International Center for Creative Music.

He was able to finish his musical studies at The New School for Jazz and Contemporary Music with a generous merit scholarship. He also had the opportunity to study under some of his musical heroes and jazz masters. International House NYC was his musical production facility. He created unique projects that brought together musicians of different styles and from distant places. He was a regular radio airplayed on Jazz FM Radio and BBC radio. In 2013 and 2014, he received the Eubie Blake Foundation award. He has also performed his music in Italy, Spain, Canada, Spain, Cuba, and Canada.

Roy led many musicians since his 2015 return to Israel. His compositions draw from many sources – from West African music to classical music to hard-bop – and fuse them into a “biblical” sound. He is influenced by Israeli multiculturalism as well as his Middle-Eastern roots. Roy’s bands are continuing to explore new interpretations and fresh versions of standard songs, in addition to his original music. He is the leader of a trio, quartet, and sextet which plays regularly in Israel as well as internationally.

Roy has recorded and performed in the past with Amos Hoffman, a well-known guitarist and oud player, as well as Avichai Ornoy (flutist), and worked on special projects alongside artists such Asihai Cohen (trumpet), Ofer Gatto, Alon Oleartchik and Anat Cohen. Also, he has shared the stage with Roberto Gatto and Dave Douglas, Eli Degibri and Greg Tardy. He also completed a residency at Banff’s International Workshop in Jazz & Contemporary Music.

He formed the “Addis Ken Project” with Abate Berihun in 2018, a unique Ethio-jazz and world music ensemble. They play deeply spiritual soul music that is inspired by ancient Jewish-Ethiopian prayers and afrobeat, as well as blues. Recent music from the project was described as “an encounter between ancient Jewish Ethiopian tradition and the spirit of modern jazz ensemble, employing musical adventureness, rich harmonys and heartfelt Blues” by the media. The group has been featured at jazz festivals in Israel, Canada, Panama, Denmark, and Canada. In 2020, the Israeli Ministry of Culture awarded them the highest artistic grant.

Roy was a recipient for the Eubie Blake Foundation award in 2013 and 2014 and the Dodge Foundation Grant in 2012, 2013, and 2014. Roy was a recipient of the Rabinovich foundation for the arts award for 2015 and a Outstanding Artist grant from the Israeli Ministry of Culture for 2016. He was awarded an artistic award by Mifal HaPais Council for the Culture and Arts in 2019.