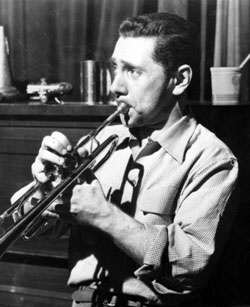 Reuben “Ruby” Braff, born March 16, 1927 and died February 9, 2003. He was an American jazz trumpeter and cornetist. Braff was a brilliantly melodic and characterful player. His unique sound on the cornet, a rare instrument in postwar jazz, made him recognizable. Although his style was influenced by Bobby Hackett, Louis Armstrong and Bunny Berigan, he made his own unique sound, which he interpreted to be modern and sparky. Born in Boston, he began his playing career in local clubs during the 1940s. He was hired by the Edmond Hall Orchestra in 1949. In 1953, he moved to New York where he was in high demand for recording and band dates. He passed away in Chatham, Massachusetts on February 10, 2003. They’ve made statements about me supposedly combining a modern approach and a love for traditional forms. People say all kinds of things because they want to categorise or label. I have only had two labels. It’s either good or it stinks. Ruby Braff in 1968. User-contributed text may also be available under GNU FDL.