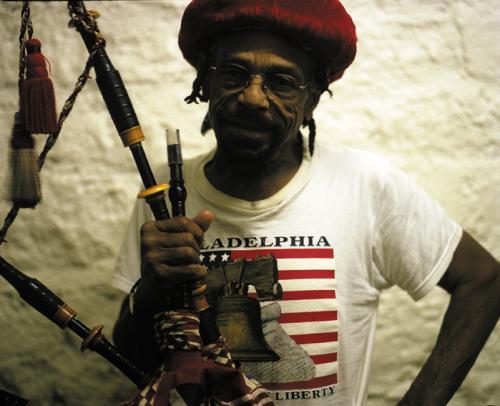 Rufus Harley, jazz’s first bagpiper was a singularly instrumental in transforming a heavy, heavy instrument that was almost exclusively associated with Celtic traditions into an expressive and spiritual part of jazz’s modern lexicon. Born May 20, 1936 in Raleigh, NC. He spent most of his childhood in Philadelphia where he studied flute and saxophone. At 18, he made his professional debut with Mickey Collins. His life was forever changed by the assassination on November 22, 1963 of President John F. Kennedy. Harley was especially moved by the Black Watch, a Scottish infantry bagpiper corps that was accompanying Kennedy’s funeral procession. He sought to recreate their powerful, mournful sound using traditional woodwinds. Harley was not satisfied with his results and purchased his first bagpipes from a New York City Pawnshop. In 1964, he secured his first gigs at Squeaky’s in West Philadelphia. The audience was bemused, but they were grateful, and Atlantic Records offered him a contract when a home demo recording reached Joel Dorn. In 1966, Harley released Bagpipe Blues, his debut album. This record proved the viability and versatility of bagpipes in an open-mic setting. He also performed on the Atlantic Records’ headline dates with Sonny Stitt (Deuces Wild), and Herbie Mann (“The Wailing Dervishes”), which led to the label offering a contract. Harley was a pioneer in jazz-funk with his 1972 Ankh label album Re-Creation of the Gods. Despite receiving praises from underground jazz media, Harley did not headline any other sessions for over a quarter of a century. He remained a fixture in Philadelphia’s club scene and headlined for many years the Tuesday night gig at 23rd St. Cafe. Harley was also a part of several European tours and, as an “international ambassador for freedom”, he was well-known among his friends and fans for giving out miniature Liberty Bells, American flags and copies of the U.S. Constitutions to people he met on his trips abroad. After appearing on many albums, including Laurie Anderson’s Big Science album and The Roots’ Do You Need More ?_, Harley was finally able to release his own album. Harley released Brotherly Love in 1998, his comeback album. In 2005, Sustain was released. He died on August 1, 2006 in Philadelphia, after a long fight with prostate cancer.